Once a week I will wallow a bit in nostalgia and write a post about a favourite author (past or present), someone who really influenced me as I was growing up.  However, I won’t stick with the obvious choices such as Shakespeare, Jane Austen, Sylvia Plath and all the paraphernalia of the adolescent girl.   At least not at first.  Not until I run out of lesser-known writers, who deserve much wider recognition.  I may not feel quite the same about them now as I did during my adolescence, but I cannot deny they have contributed to me as I am (and write) now.  Today’s chosen author has a double significance, as she is Japanese.  What better way to pay tribute to the courage and resilience of the Japanese people one year on from the earthquake and tsunami? 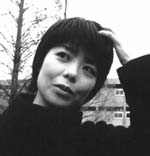 I discovered Tawara Machi while I was studying Japanese at university.  We were struggling to understand and translate the famous haiku and tanka poems written over a thousand or more years of Japanese literary history, so our teacher introduced us to the contemporary poet Tawara Machi.  A young school teacher and translator of classic Japanese waka poetry, she is credited with single-handedly reviving the tanka form, which had fallen out of fashion compared to its shorter, flashier cousin, the haiku.  In less than six months, her 1987 debut volume of poetry entitled ‘Sarada no kinenbi’ (Salad Anniversary) sold nearly 3 million copies in Japan and gave birth to the so-called ‘salad phenomenon’ of a young writer being crowned as rock star, TV celebrity and serious intellectual all at the same time.

A few nights ago I was searching for a book of poetry to read before bedtime and I cam across an English translation of ‘Salad Anniversary’ by Juliet Winters Carpenter, published by Kodansha International in 1989.   I probably hadn’t opened it in 10-15 years, and perhaps you need to read it as a young person to fully savour the somewhat whimsical and very personal ruminations of a young woman in love.  Yet, once again, these short poems captivated me with their freshness, intimacy, flashes of inspiration. Some have objected that Juliet Carpenter’s translations are a bit too sparse and dry (you can find an exploration of alternative translations here), but I find they capture the succinct charm of the original, and the spirit of that everyday observation that suddenly reminds us of the universal.

I became curious: what had happened to Tawara Machi?  Was she ever able to live up to her early reputation? Well, after quite a bit of digging around on websites of the world, I have discovered the following:

She sold more than 7 million copies of her first poetry book worldwide – almost unheard of for a volume of poetry, let alone a debut volume by a poet writing in a language not widely spoken all around the world.  Somehow, she survived the furore and stayed remarkably sane.  She stopped teaching two years or so after her fabulous success and became a full-time writer, while also hosting her own TV and radio shows, translating from the Japanese classics, being a judge on tanka poetry competitions and so on.  She has published several other volumes of poetry, including one entitled ‘Pooh’s Nose’ (after the birth of her child) and ‘Street Corner of Capitalism’ (about economic stagnation and urban alienation).  You can see and hear her reading some of her recent poems on YouTube. (translations are below in the comments section), or access Quentin S Crisp’s lovely readings of his translations of her poetry as part of a Soutbank Centre project back in 2007.

I am relieved that the story has a happy ending, that her early success (and incredible pressure on her to top that) has not killed off her creativity.  She may never again achieve that cult status, but the quality of her poetry, most critics agree, remains high.  I just think it’s a pity that she is not more widely known outside Japan, although I have to admit so much of Japanese poetry (both classic and contemporary) is extremely difficult to translate, because of its allusive, elliptical nature and constant self-references.

Here are some of my favourite poems by her:

‘Call again,’ you say and hang up/ I want to call again right now.

Late afternoon/ you and I gaze at the same thing /as between us something ends.

Like getting up to leave a hamburger place/ that’s how I’ll leave / that man.

Now that I wait for you no more,/ sunny Saturdays and rainy Tuesdays / are all the same to me.

To live is to reach out your hand/ The baby’s hand/ grabs Pooh’s nose.

Today a voice has joined his smile/ like a black and white film/ changing to colour.

A certain street corner of capitalism/ The tissues one accepts and receives when needed.

(the last with thanks to From Tokyo to the World, spreading the word for Japanese culture)

10 thoughts on “Whatever Happened to … Tawara Machi?”