A bit of erasure poetry for you tonight (well, more prose than poetry), which I’m linking to that wonderfully welcoming venue for sharing poems and ideas, the dVerse Poets Pub.

It’s almost exactly 25 years since our revolution in Romania. For many years I called it a ‘stolen’ or ‘so-called’ revolution, as we saw people tarnished by their Communist and security forces links become the most vocal proponents of the free market (and profiting hugely by it). But, no matter what followed, that doesn’t diminish the magic and hope of those few days when we really believed we could change the world. I found my diary from that time and have chosen a few lines from here and there to give you a feel for the atmosphere.

Dad was called in to the office on Sunday evening.

In Timişoara, rubber cudgels. Bullets too, so we hear.

We’re all hoping for more.

‘No public gatherings, curfew at 8 p.m., keep your ID card with you at all times.’

The school is strangely empty, profs barricaded in the Dean’s office.

Nearly holidays but no tickets:  trains have been cancelled.

‘Those imperialistic and fascist forces trying to destabilise our fatherland.’

They dared the army to shoot:

‘We are the people, who are you protecting?’

This morning he calls a public meeting, shown live on TV,

with slogan-filled banners, portraits of the Beloved Couple.

I’m on my knees, praying for something to happen.

Suddenly, someone interrupted – I heard, I heard the boos!

Utter befuddlement on his face: 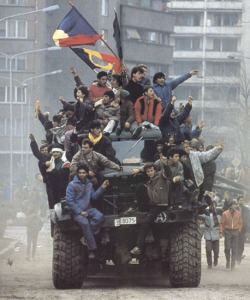 My parents begged me not to leave the house.

‘All students should resign their party membership:

a party that can kill its own people has lost all credibility.’

Smashing glass with your bare head.

Radio switched on every few minutes.

What were we expecting?

All we heard were patriotic songs.

‘This is Radio Free Bucharest. We have an important announcement to make.’

I went to a hospital to offer my first-aid skills but they only took the gauze.

We want to hug. We need to run.

A joy to see how well-behaved and selfless people are,

even if enemies and sharpshooters lurk atop buildings.

In the breaks between the shooting, we help

I drop the cherries in my pie, keeping time with the machine-guns.

This morning our block of flats was shot at: