I’ve written a pretty exhaustive report on the panels and encounters with writers (including quotes) for Crime Fiction Lover, so I won’t repeat myself here. Let me tell you instead some of my personal highlights. 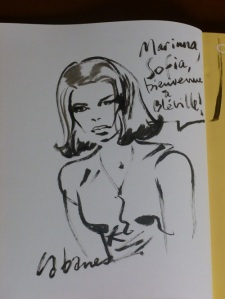 A few of you have noticed and complimented me on my new Avatar on Twitter. This is a very idealised portrait of myself drawn by Max Cabanes, one of the foremost artists of bandes dessinées (graphic novels or comic strips, hugely popular in the French-speaking world but with no perfect equivalent in the rest of the world), winner of the most prestigious prize in the field, the Grand Prix du Festival d’Angoulême in 1990, and a contributor to Charlie Hebdo. I had already bought his latest work, the adaptation of Jean-Patrick Manchette’s Fatale (I had dithered previously over whether to buy this or the collected works of Manchette … ended up getting both for myself for Christmas).

However, I stupidly forgot it at home, right next to where I’d packed my suitcase, so I couldn’t get him to sign it (and BD artists always draw something when they give their autographs). So I kept walking up and down in the very busy main hall, trying to find a solution (they had none of Cabanes’ other volumes). Finally, I bought another copy and explained the whole dilemma to him. He was so lovely and chatty, we ended up talking for 20 minutes or so. He went to Paris initially to become a ‘serious’ artist and sculptor, claimed he wouldn’t sell his soul to BD, until he discovered he loved telling stories… and that it helped pay the bills much more effectively. He did admit that it was much more difficult for young artists today to break into the field and make a living out of it (and he had advice for my older son, who likes writing and drawing his own BD).

Finally, although I knew that it takes at least a year to produce a normal sized graphic novel, I was stunned to discover just how long it took Cabanes to adapt Fatale – nearly 3 years! That’s because he is meticulous about his research, every little detail has to be perfect, and, even though Manchette is very cinematic in his writing, you still have to select the best ‘moments’ to illustrate. So, worth every euro, I think! He also told me he is reviewing his reworking of ‘Princess du sang’ by Manchette and will have a beautiful re-edited version published in autumn.

Meanwhile, I have a spare copy of Fatale to give away, so let me know if you read French and have a hankering for it…

Meeting some of the big names of literature can be an intimidating experience, especially when you are just one of the hundreds who are assaulting them at such events. Plus, I have the tendency to get uncharacteristically tongue-tied and shy (afraid I can’t think of anything intelligent to say, something they haven’t heard thousands of times before). So it really helps when you bump into them informally or somehow manage to catch them at a time when they are not being jostled into place for their next panel or signing. [It must be very tiring for them, to be honest, as the timing is very tight and you have to run from one venue to the next.] 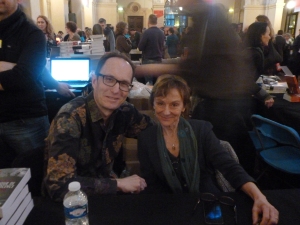 Most crime writers I’ve met are delightfully unpretentious, warm human beings. I gushed to Sean French and Nicci Gerrard (of Nicci French fame) that I’ve been a huge fan ever since I heard them speak about the Moomins and the Martin Beck series at the Henley Literary Festival 6 years ago and congratulated Nicci on her brilliant initiative to allow family of dementia patients improved access to NHS hospitals. 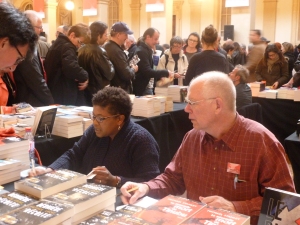 You have to balance this, however, with the danger of being considered a stalker. I happened to come across Attica Locke powdering her nose and was not sure if I should approach or not. I’m glad I did, though, because she is funny, down-to-earth and politically engaged. She was signing books next to one half of Michael Stanley – namely Stanley Trollip – from South Africa (of Inspector Kubu fame) and you couldn’t have asked for nicer neighbours at the table. Stanley explained the very collaborative writing process with Michael Sears as ‘like an old married couple, we may bicker but we haven’t got divorced yet’. A bit like Kubu and his wife Joy, then!

Alongside personal hero(ines) such as Ian Rankin, Denise Mina, Val McDermid and Sylvie Granotier, I also got to meet Louise Penny.  I only discovered her series about Quebecois inspector Armand Gamache 2 years ago (thanks to Margot Kinberg), but she has become one of my favourite authors with her inimitable blend of cosy location, unforgettable characters, cracking plots and profound questions about the human condition, personal relationships and the nature of beauty and creation. She is so gracious, beautiful and generous: I want to be like her when I grow up! 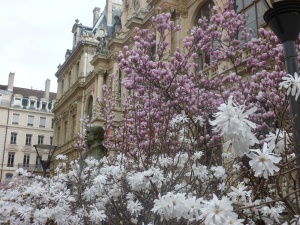 3) Online Friends and the City Itself

But what would even a beautiful and gourmet city like Lyon be without the people you meet there? I got to spend some time with the charming Lyonnaise-by-adoption Emma, who blogs in English and has done an excellent write-up of the event.

Last, but not least, I had the pleasure of meeting once more my blogging friend Catherine, whose pictures of the event are much more professional than mine. She knows more about British crime fiction than any other French person I know, plus she is my constant source of reference for French and other crime.

I’ll tell you more about Saturday night’s Murder Ball and the city-wide Murder Mystery Trail in a future post, as well as the books I bought and the new-to-me authors. I’ll probably drone on and on about this event until you’ll start wishing I’d never gone there. I don’t get out much, you see – this is my one big event of the year, so bear with me…

In return, please keep me informed of all the other great events in the UK and US that I’ll be missing this summer!

27 thoughts on “My Favourite Moments in Lyon”