Two of the panels I attended at the Quais du Polar were more overtly political (although I avoided the ones on French or American politics – no need to depress myself still farther).

Back to the East

A bit of a clanger at the start of the session! Although the moderator said it was an attempt to escape the dominance of Anglo-Saxon and Western crime fiction, he then proceeded by saying that Volić had been born in Budapest, at which she retorted: ‘No, another capital city starting with B – Belgrade.’ I suppose that just goes to show the ignorance about ‘Eastern Europe’ which is still quite common in the West – but then again, the room was packed, standing room only at the back while I sprawled out on the floor, so perhaps there was genuine curiosity and willingness to find out more. 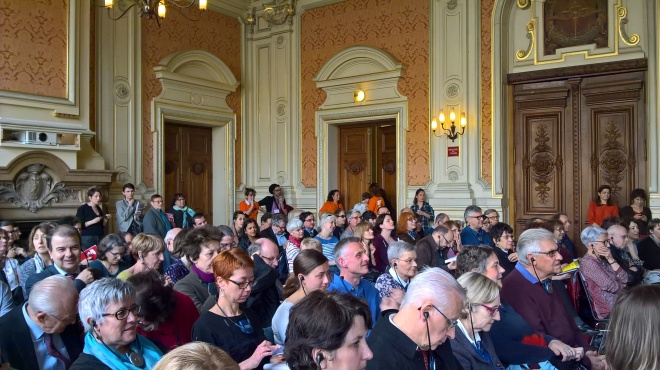 The reason I put ‘Eastern Europe’ in quotation marks is because all of the authors remarked that this is very much a malleable concept rather than a geographical reality. Nowadays it has become more popular to say Central Europe, but without necessarily meaning it. Meanwhile, it could be argued that Estonia is more Nordic in feel and has very little to do with the Balkanic fellow panellists. So you couldn’t help feeling that the panel had been cobbled together purely because ‘well, you are all from that part of the world somehow’, without much thought or care going into the process or any attempt to find common themes.

The books themselves didn’t necessarily have anything to do with the East, either. Chirovici said his book takes place in the US and is all about the power of memory to falsify our recollections, nothing to do with the history or politics of Romania, past or present. Meanwhile, Hargla said his whole intention was to offer escapism, which is why he had gone for mysteries set in medieval times (the 15th century being also one of the most protracted periods of peace in Estonia’s troubled history).

So it was down to just Volić and Teodorescu to state that their books are making a political statement. Volić has written a crime novel set around the time of Srebrenica, because she wanted to show how ordinary humans cope with individual tragedies at a time of mass tragedy. She co-writes with German author Christian Schünemann and her books are primarily intended for a Western audience, as she thinks the Serbs are all too aware of the subjects she is addressing. There are no easy answers in a book which unflinchingly examines a country’s guilt, and attempts to forget or deny the evil acts of the past.

Teodorescu refers not to Romania’s past but its present-day issues in his novel Spada, which is the story of serial killer who targets criminal gypsies. Through the ambivalent public, political and media reactions to this killer, the author demonstrates just how easy it is to normalise the language of hatred, to raise the spectre of the ‘Demon Other’ and to lose any vestige of kindness and civilised behaviour in a democratic, open society in which 95% of people would describe themselves as ‘tolerant’. The book was published in Romanian a few years ago, but seems very timely with Trump’s America, Brexit Britain and now France and Germany possibly veering down the same path.

The panellists started off by joking: ‘Welcome to the most depressing topic of the whole conference’, but in fact it was also one of the most fascinating topics, enabling us to see how totalitarian regimes have commonalities regardless of political leanings or culture. The moderator claimed that perhaps there was a Zorro instinct in each one of them, to uncover oppression and injustice through their fiction. While the authors themselves made no such pretentious statements, it was clear that giving voice to forgotten stories, to the vanquished, to truths which had been buried by the wayside was important to them.

Del Arbol said that espousing or allowing just one single truth is dangerous, that is what kills. He also considers himself Catalan, Spanish and European all at once and does not see why this should be a contradiction. Miłoszewski said that all countries have something in their past that they are less proud of, and that they want to remember only the glory days, but the role of the artist is to offer an alternative to the ‘official’ interpretation of the past, to remember the shameful incidents as well. That’s what true patriotism means. Otherwise, nostalgia for the golden past without any shades is merely nationalism. Fernandez also pointed out the conundrum of the perpetual outsider: in France is considered the Spaniard, in Spain he is considered too French. Qiu described his father’s humiliation as a member of the bourgeoise for daring to own a small perfume factory during the Cultural Revolution – and openly admitted he resented his father at the time for blocking any future career he might have had. He also told us how he was forced into exile in the US and had to start writing in English. This is the sad truth of all-pervasive state interference: ‘People don’t make the choices themselves – they have them made for them.’ He brought all this reluctant collaboration and ambiguity into Inspector Chen’s character.

And here is my book haul – reasonably modest this year, as I was travelling with hand luggage only. One in German: the Thomas Willmann I mentioned in the previous post, two French authors (Marcus Malte and the only one I was missing by Jean-Claude Izzo, Chourmo, which also happens to be my favourite), three translations into French (Victor Del Arbol, Bogdan Teodorescu and an absurdist Russian novel by Olga Slavnikova), Ron Rash and David Vann in English (although they are much more expensive in France, of course, but I was keen to have them signed) and finally another Romanian author, Bogdan Hrib, with his first book translated into English (he is also Teodorescu’s Romanian publisher and there may be some exciting collaborations forthcoming, fingers crossed). 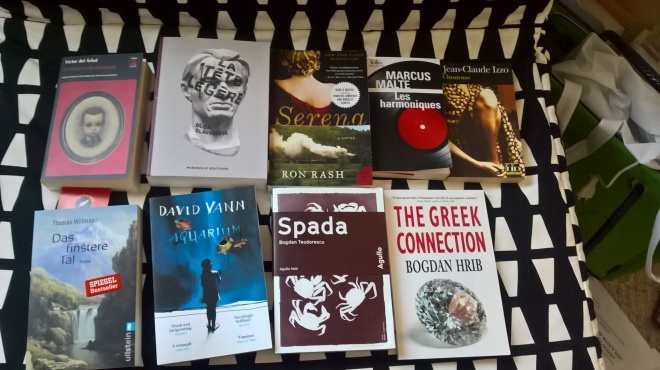 I got to meet many delightful authors, but got a little bit starstruck and forgot to take pictures. Apologies to the charming Ragnar Jonasson and Lilja Sigurdardottir for not pestering them for pictures. I was more than a little awestruck by Victor Del Arbol and David Vann, and I never got to speak to Cay Rademacher and David Young, but I did manage to take some pictures of the truly international Johana Gustawsson, the always bright and funny Dominique Sylvain (I believe it’s the 4th time I see here either in Lyon or Geneva) and newcomer – all the way from Australia – Jane Harper.

I was also lucky enough to receive an invitation to the preview of the first episode of the new (6th) series of Engrenages (better known as Spiral in the UK). I had already heard the main writer Anne Landois discuss her work in Lyon a couple of years ago, but this time she was joined by the producer at Canal+ and the actors playing the police officers Tintin and Gilou, as well as Judge Roban (the two women actors had other commitments). The series has been going strong for 12 years now, and the actors (plus or minus a few high-profile losses) have been together for pretty much the whole time and have become a tight-knit family. Anne said that she was constantly inspired by the actors to develop characters even farther, while the actors said they really felt they were part of something special, an emphasis on the personal lives of their characters as well as the investigation which is quite new to French TV.

Of course I cannot give anything away about the new series, otherwise they would have to kill me. Suffice it to say that the investigation will extend to the troubled Department 93 on the outskirts of Paris. Sadly, it is also Anne’s last season on the show, as it’s been a pretty full-time job for the past 10 years and she understandably wants to try something else. However, a new team of writers are already working on Season 7. Meanwhile, Season 6 will be out in September on French TV and hopefully soon afterwards on BBC4.