I always knew Karen Sullivan of Orenda Books was a formidable woman and a passionate publisher, but she really outdid herself this evening. Where else can you see 15 excellent and diverse writers, from 7 different countries (8 if you count Scotland), all in the space of two hours on a Wednesday night in central London? 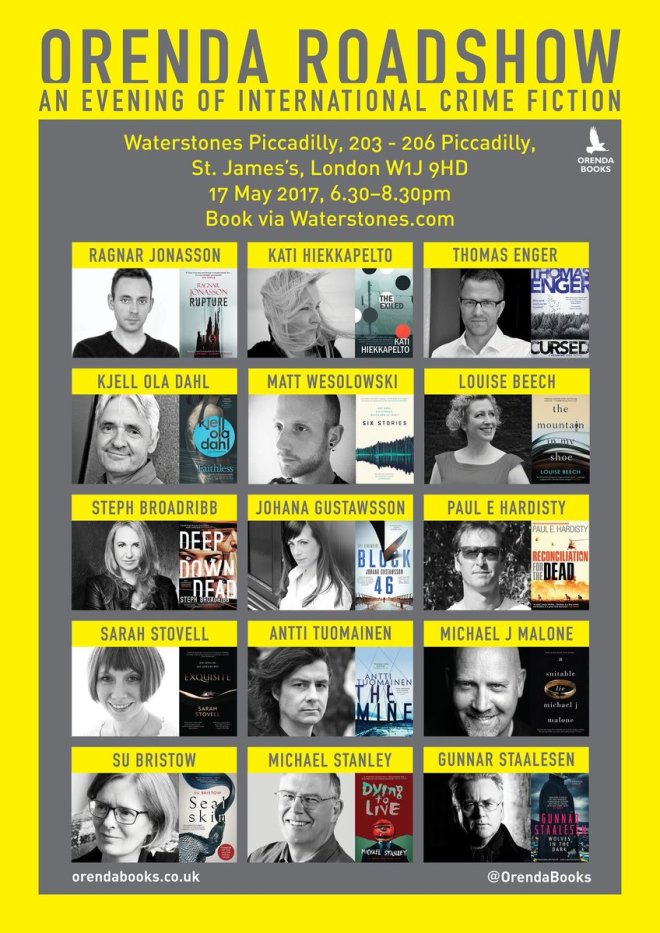 The concept was simple but effective: each writer introduced themselves and their book briefly, then each read a passage. There was a bit of time for Q&A at the end, but time just flew by and I could have listened to them for hours. They are a fun bunch of writers, who have gelled together really well and build upon each other’s words at public events. While it was predominantly a psychological thriller/crime fiction sort of evening, there are also some authors who have written outside that genre: Su Bristow with her poetic retelling of the Selkie myth, Louise Beech with her heartbreaking portrayals of children and Sarah Stovell with the story of an obsessive love which reminded me of Notes on a Scandal.

This was followed by an enormous and delicious cake, aquavit to celebrate the National Day of Norway alongside more usual beverages, and lots of informal mingling and book signing.

It was great to also meet some of the others on the Orenda team: editor West Camel, distribution group Turnaround, cover designer Mark Swan. There were familiar faces of bloggers as well. Karen has managed to create a real feeling of community and genuine enthusiasm around her authors and publishing house, which feels more like family than corporate care.

On the way there I was musing about Orenda’s ‘brand’. Karen makes no apologies about offering entertainment, but it is page-turning, original, good entertainment, rather than one relying on ‘more of the same cliché-churning drivel that is currently making money’, which some of the publishing giants are turning out. I may not love all of the books equally (I am not a huge action thriller fan, for example), but I have not disliked or left any Orenda book unread. I can count on them to entertain and enlighten, make me laugh and cry, while some of them have become huge favourites.

Of course I already owned all of the books, thanks to Orenda’s wonderful habit of involving bloggers and reviewers pre-release, but that didn’t stop me buying a few more to be signed or to give to friends. I also started Six Stories by Matt Wesolowski on the train on the way to the event and was so riveted that I did not stop until I finished it last night (or early this morning, rather).

The Roadshow will be stopping at Crimefest in Bristol next, so go and see them there if you get a chance. Congratulations to all, and I can’t wait to see what you are all up to next.