Back in the days when I used to work in London, my office was on Piccadilly, so I used to pop into the exhibitions at the Royal Academy quite frequently. This time I had to plan and travel to see the America After the Fall: Painting in the 1930s exhibition (as seen by Emma in Paris and associated with books of the time), which closes on the 4th of June, but I’m glad I did.

First, let me start by saying that it is rather small – only three rooms, making it at £12 entry fee for the exhibition – a high price/per room ratio. I have seen many more artists at the wonderful Phillips Collection in Washington DC. However, if you do not have access to American paintings, it is a good starting point, with a very informative guide in each room.

The exhibition was very popular and full of people of all ages, and I wonder if it is because the 1930s have such a resonance for us nowadays. Certainly I could detect many parallels:

a long drawn out economic depression and the decline of industry

nostalgia for a glorious past and the ‘simpler’ country life

but, above all, unsettling visions of dystopia

Art born out of crisis and insecurity, art (and a nation) searching for its identity: it bears out the belief that art can remain after those troubled times have gone, and can offer a far better insight into all its fears and hopes, dreams and nightmares, than mere historical description can ever hope to capture.

I then had a lovely, protracted lunch with two friends from primary school. We’d not met in 30+ years, but were not short of topics to discuss even after we’d gone through all the ‘remember that horrible teacher?’, ‘remember when that wonderful teacher took us to the ballet?’, ‘remember what ghastly clothes we wore in that class picture?’ etc. etc. It turned out that our lives featured some great parallels (we all went to Cambridge, for instance, although at slightly different times, we all travelled widely and ended up doing something very different from what we originally studied), but above all, we all had a very international, open, tolerant outlook. Which goes to show that exposing children to different cultures when they are very young is the only way to foster diversity, genuine curiosity and willingness to understand.

Two more brief observations about my day in London. 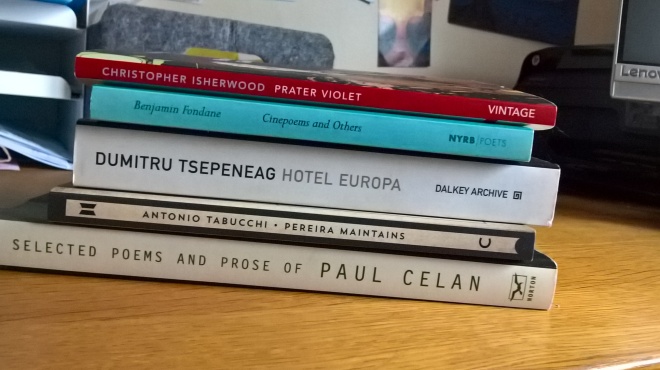 Three Romanian writers (one wrote in German, one mainly in French and one in Romanian), an Italian and an Englishman with international connections. The 1930s theme of menace continues too, not just with Isherwood, but also with Benjamin Fondane, who died in a concentration camp in 1944, Paul Celan’s parents died in labour camps during WW2, and Tabucchi’s book is set in Lisbon in 1938m in the grip of Portugal’s fascist dictatorship.

I already read Prater Violet by Christopher Isherwood last night. It’s a charming, if slight story about the time Isherwood was a script consultant for a film directed by an Austrian. Sadly, it does not take place in Vienna, but it describes a period of civil war in Vienna in February 1934, following the protests of socialist workers against Chancellor Dollfuss’ plan to create a one-party state, and huge uncertainty which led to an attempted coup by the Nazis and Dollfuss’ assassination in July 1934. An excellent indictment of British lack of interest in ‘Continental’ affairs at that time, particularly in this passage where an insensitive journalist asks the film director what he thinks of events in Austria and is surprised by the counter-attack of ‘Well, what do you think about it?’:

‘After all, Mr Bergmann… you must remember, it isn’t our affair. I mean, you really can’t expect people in England to care…’

Bergmann’s fist hit the table, so that the knives and forks rang. He turned scarlet in the face. He shouted, ‘I expect everybody to care! Everybody who is not a coward, a moron, a piece of dirt! I expect this whole damned island to care! I will tell you something: if they do not care, they will be made to care. The whole lot of you. You will be bombed and slaughtered and conquered. And do you know what I shall do? I shall sit by and smoke my cigar and laugh. And I shall say, “Yes, it’s terrible; and I do not give a damn. Not one damn.”‘

Patterson at last was looking a bit scared.

‘Don’t get me wrong, Mr Bergmann,’ he said hastily, ‘I quite agree with you… We don’t think enough of the other fellow and that’s a fact… Well, I must be toddling along. Glad to have seen you. We must have a talk, some day…’

Well, as you can see, even a day of leisure and admin in London ends up political at these times. I’m off to water the flowers, breathe in deeply and meditate.

26 thoughts on “Well-Spent Day in London Plus Book Haul”