While bringing down books from the loft, I realised that I had some very ancient, almost forgotten books there, which have travelled with me across many international borders and house moves. Some of them are strange editions of old favourites, while some are truly obscure choices. I thought I might start a new series of ‘Spot the Weirdest or Most Obscure Book on my Shelf’. Although it can also be interpreted as ‘Books which don’t receive the buzz or recognition which they deserve.’ I would love to hear of anything on your shelves which you consider unusual or obscure or deserving of wider attention? How did you get hold of it? Why do you still keep it? What does it mean to you?

On the top of my centre-right bookshelf I have an odd assortment of old editions by favourite authors (many of which I bought second-hand at school jumble sales). Here are three which I have read many times and probably will reread in the future.

This book represents my ‘way into’ Sylvia Plath, who became one of my favourite poets (she still is, by the way, although I am less interested in her biography by now). I found this rather massive book in the English language bookshop in Vienna when I was about 12 and had no idea who Sylvia Plath was. In fact, I thought it was going to be a bit like Daddy-Long-Legs, which was a book I loved at the time (the film too, with Cyd Charisse). Clearly, my parents had no idea who she was either, or they might not have approved the purchase of it for their overly dramatic, moody, poetically inclined pre-teen. But of course, this is the carefully sanitised version of Sylvia that her mother got to see. Nevertheless, impressive enough to make me scoop up everything else she had ever written or that had ever been written about her.

Elizabeth Goudge: The Herb of Grace

This is one of those books I came across at a book sale. Although the cover was pink and yellow (an uneasy combination of colours), I picked it up because I loved the author, having read The Little White Horse aloud to my mother while she was cooking, and also enjoyed The White Witch, The Middle Window and The Heart of the Family (I laboriously ticked all the other books I’d read on the inside cover). Again, I must have been 12-13 at the time and I’m not sure what I got out of this book about post-war trauma, adultery, forgiveness, love and friendship, other than the many references to The Wind in the Willows. Goudge’s style feels old-fashioned and quaint nowadays, has perhaps not aged as well as Barbara Pym or Elizabeth Taylor, but she was my introduction to that kind of writing, which one might call the ‘furrowed English middlebrow with an ironic raise of the eyebrow’. I don’t mean any contempt, by the way, as I love this writing style, although as I grew up I tended to prefer the more mordant wit of Muriel Spark or Nancy Mitford.

Now that I am reading the Cazalet chronicles by Elizabeth Jane Howard, I can say that this trilogy reminds me of that better-known series. 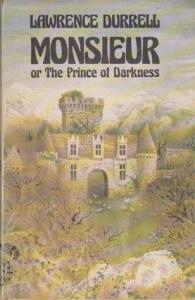 Having adored Gerald Durrell’s evocation of his family’s life in Corfu, which we had read out to us in class while we were doing arts and crafts (I was always far more interested in the book than in the crafty side of things), I borrowed Lawrence Durrell as soon as I could from the library (ah, the charms of benign neglect by parents and librarians!). The baroque prose and evocative landscapes of the Alexandria Quartet enchanted me. I soon graduated to the Avignon Quintet, of which this is one, perhaps my favourite, with its description of Christmas in a crumbling chateau in Provence (yep, the love of chateau and France have been a constant in my life). What would I think of it twenty-odd years later if I were to reread it? I now prefer the more pared down style of writing, so would it give me indigestion from all the riches?

13 thoughts on “Most Obscure from My Shelves – Anglo Favourites”