This is part 2 of what was threatening to become The Neverending Story in my last post.

First of all, an enormous thank you to Kaggsy who wrote about the Red Star over Russia exhibition on her blog and convinced me that I should go to see it. I was initially sceptical, because the Socialist Realist art that I had witnessed in Romania during the Communist era was truly awful, a feast of nauseating kitsch. This exhibition, however, drawn primarily from the collection of British graphic designer David King, focuses on early Soviet art, 1905-1955. This was a period when it was still all about creating a new society and demonstrating that through a new type of art. New fonts, new designs, experimental work and techniques were all employed to show the modernity and success of the Soviet venture. I thought I knew the history behind it reasonably well, but I discovered many new things at this exhibition, for instance the multilingual posters to capture hearts and minds in the Soviet republics. Thank you, curators everywhere, and it always pays to stay humble and learn more! 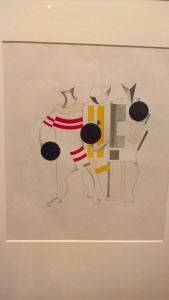 Was the Soviet artistic enterprise all a lie? Yes, quite a bit of it: success was military rather than economic and came at a great price. Many of the artists were imprisoned or purged by Stalin at a later date. Their designs were imitated at knock-off standards in the decades that followed and by the other Soviet satellite states, cheapening their impact. Yet many avant-garde artists clearly believed at the time that art and architecture could bring out about a more democratic approach to art, render it less elitist, create a new environment where everyone felt empowered to create. All admirable goals (sound familiar to what we are discussing nowadays?). Plus, many of the designs still look fresh and beautiful today – and especially poignant, when you consider the tainted history behind them.

Another part of the exhibition which was painful to see: the self-censorship and mutilation of photographs. Ordinary citizens who had photographs of the Soviet leaders would then cross or cut out those who had fallen out of favour, for fear that someone would examine these photos in their own homes and accuse them of colluding with the traitors. Romania in the 1980s may have had many flaws, but at least we did not have quite this level of terror and paranoia.

Just by way of contrast, here is an example of the disgusting cult of personality and bad art that I grew up in.

The Emma Press is a charming independent press based in Birmingham, publishing mainly poetry (and some short fiction and children’s books). They don’t often organise events in London, so I was delighted to hear that they were launching their latest anthology of Love Poetry at an unusual café Coffee Cakes and Kisses not far from where I work. The café is designed to look like a kitchen (a working kitchen, where people can watch food being prepared), so people pull up chairs or stand around to chat like at the best parties. It was perhaps a bit too small for the large number of people who did turn up to watch the readings by 20 of the 56 poets featured in the anthology. I heard of Emma Press through Jacqueline Saphra, whose poetry I have admired ever since I returned to poetry in 2012, and she was there too. But I also got to meet and listen to new-to-me poets like Kitty Coles, Rachel Plummer, Jack Houston, Lenni Sanders, Paul Haworth, Maya Pieris and Ben Norris. The Emma Press Anthology of Love is a beautiful work of art: beautifully produced and illustrated, with a colourful cover that belies the anything but saccharine poetry inside.

Unsurprisingly, with so many cultural events happening, I did get a bit carried away and bought quite a few books. I was quite proud of myself for not buying all the tempting Russian novelists or books about Russian history at the Tate Modern, but then I lost control at the other events. In addition to the ones I bought to be signed at the Emma Press launch and the Literally Swiss event, there were also a couple I borrowed from the library and one I got gifted. Anyway, here is a selection.

I won the beautiful edition of Lidia Yuknavitch’s The Book of Joan in a Twitter giveaway and it came with a matching tote bag. Both so beautiful and turquoise that my younger son, who is not usually impressed with my book post, exclaimed out loud and kept the bag for himself.

By coincidence my friend gave me a dystopian novel about the consequences of China’s one child policy ‘An Excess Male’ by Maggie Shen King, which I am even more eager to read after speaking to Xiaolu Guo on Friday night.

Unrelated to any cultural events, but espied a while ago in the Waterstones Gower Street, I finally succumbed to the temptation of buying my fifth different translation of The Tale of Genji, this time by Dennis Washburn. I am hoping it will bridge the gap between Seidensticker’s user-friendly translation and Tyler’s rather too literal one.

Finally, I had a good old rummage in the Senate House Library, based upon feedback from my older son’s Parents Evening. They are reading Jekyll and Hyde for GCSE and the teacher suggested that he read other Victorian novels such as The Picture of Dorian Gray. So I borrowed that for him, but of course I can never stop at just one. I thought that HG Wells’ The Island of Dr Moreau and Bram Stoker’s Dracula also described scientific experimentation and human monsters rather well, reflecting the darker side of the British Empire. A few years ago he would have run a mile from any book that I recommended to him, but now  I hope he will read them and want to discuss them with me.

Last but not least, I got James Baldwin because the February read for the David Bowie Book Club is James Baldwin’s essay The Fire Next Time.

Next week or fortnight will be much quieter, although I will be taking my older son to a theatre performance at RADA – a great opportunity to see some of the nation’s future stars.