I did not have internet access at my B&B while I was in Hay, and the Wifi access on the Festival site was patchy at times, so I only tweeted occasionally but was unable to give a day by day account of the three days I spent at the Hay Festival. So I will have to write several posts to discuss the panels, discussions, personal thoughts and book buying binges that all took place during those amazingly rich days.

After an adventurous trip led by the GPS across cattle grids, narrow one-lane roads, Brecon nature reserve with sheep and horses following my car curiously and a pallour of fog hanging over me, I finally made it to my B&B just outside Hay on Wye. The weather was atrocious. There had been thunderstorms earlier in the day accompanied by power failures, but by the afternoon it was merely raining heavily, and it kept it up for most of the weekend. Luckily, the organisers are prepared for the Welsh climate and there are plenty of tent-like structures everywhere, plus covered walkways between them, so this is not Glastonbury levels of mud (although one year it was apparently more like Hay IN Wye). And of course, as soon as any ray of sun came out, everyone was milling about on the wet grass and deckchairs. You have to admire British resilience!

I was sensible on Friday afternoon and allowed myself plenty of time between the two events I attended. There is a downside to that, however: too much time to browse both in the Festival bookshop and the second-hand bookshop run by Oxfam. My total book tally by the end of the weekend was 27 (many second-hand, and all the new ones signed by the authors), although I feel very virtuous that two of those are for my boys. I suppose I’ll have to write a separate post about the book haul.

The first day was all about debate rather than literature. The first panel featured researchers from the University of Cambridge Helena Sanson (Italian studies), Prof Bill Byrne and Marcus Tomalin talking about machine translation. I was amused to hear how algorithms transform words into numbers (with all the lack of subtlety one might expect), and that the BLEU score for establishing the accuracy of a translated text can lead to garbage results. It felt a little bit like the conversations between me and WB – with me as the human translator and him as the machine translation. The key message was that machine translation can increase a professional translator’s productivity or help in the case of basic, technical and repetitive texts, but human translators are unlikely to be supplanted by it anytime soon. What unnerved me slightly was the more sinister message about the fate of the so-called minority languages, the ones spoken by few people. Of the approximately 6000 languages in the world, Google Translate covers only 130, so less than 2%. This is unlikely to change, as it’s costly to train machines to learn the equivalences between languages, so the money for research will flow into the languages where there is a lot of potential for application (and where there are already lots of examples in place). The preservation of smaller languages will have to rely on charities, research councils, public initiatives… so many will die. Plus, does this artificial preservation of a dead language in a showcase really help? As an anthropologist who has listened to recordings of natives speaking now defunct languages, I can confidently say that these are meaningless without knowledge of the cultural context surrounding it.

The second panel (attended by fewer people and most of them women) was organised by the University of Worcester, and included academics Maggie Andrews (consultant on the BBC programme Home Front), Sarah Greer, Krista Cowman (consultant on the Sufragettes film), Anna Muggeridge (Ph.D. student researching women’s work in the Black Country) and Dana Denis-Smith (founder of Obelisk Support for women lawyers, who started an initiative about telling stories from the first 100 years since women entered the professions in 1919). The title of the session was: Is 2018 going to go down in history as the year of lasting change in women’s rights?

And the answers of the panel matched my own not very optimistic one (although I’d be happily proved wrong). Although it has become much more acceptable to define yourself as a feminist than it was 5-10 years ago, the panel felt that it was almost like clicking Like on a Facebook page, that #MeToo is still very much a privileged white middle-class movement and that 2018 happened to coincide with a lot of anniversaries but by 2019 it might feel already like ‘it’s been done, it’s over now and we can move back to life as usual’.

There was also a warning that progress for women’s rights always seem to take a step backwards when bigger events overshadow them (world wars, Vietnam war and oil crisis, austerity government and economic crash and Brexit), yet women are the ones that get disproportionately hit by these.

One important point that the panel made was that a lesson contemporary feminists might learn from suffragettes is that we should focus on a single issue and really fight hard for that. However, it all unravelled a little when it came to defining what that single issue might be even amongst the panel (let alone across the world). Opinions were split between equal pay, social care and precarious work, extending Me Too to all women everywhere, valuing women’s work more. I really liked Dana Denis-Smith’s comment that we devalue women’s work so much that as soon as women enter a particular bastion of men’s work, that also becomes devalued and starts paying less (women in accountancy or solicitors for example).

One final thought on today’s post about Hay, before we move on to literature, was that although some care was taken in programming a diversity of writers, the audience was still predominantly white middle-class (with a tendency to upper). This is perhaps not surprising considering how expensive it is to attend. I don’t even want to calculate the total amount spent, for fear it will give me a panic attack, but add up: petrol costs, B&B, overpriced food at the festival (£9 for a burger – without any extras, £3.50 for a coffee), parking, £7 entrance fee on average for every panel… 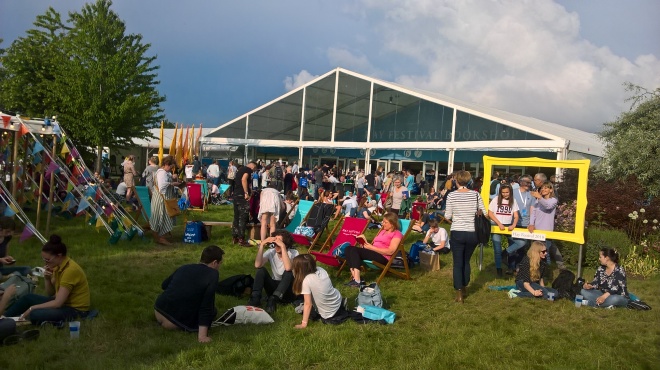 So I was not surprised to find lots of yummy mummies sipping Prosecco and gentlemen with straw hats, pink trousers and kerchiefs, children dressed in muddy designer clothes and wellies called Freya, Sebastian, Benedict and Isla. However, I also started chatting to lots of wonderful people in the queues: sheep farmers from the local area, translators, Americans, Irish, Sri Lankans. And of course I do wonder how much of the earnings of the festival gets ploughed back into the local community – or do the organisers just pack up their tents at the end of it all and take all the money and leave? As my B&B host said: ‘At least for 10 days a year most people in Hay can make a little money from renting out their rooms or fields.’