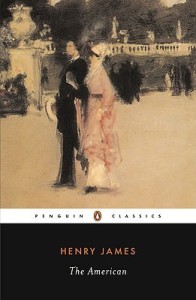 It is Henry James’ birthday today. Although I didn’t know that at the time, I spent most of last week reading one of his early novels The American, so it seems appropriate to review it now. I read the original version of the book, published in one volume in 1879 in England, but James was a compulsive tinkerer with his work and he edited this novel considerably to be more in keeping with his later style and to make it slightly more ‘plausible’, for the New York edition of 1907.

I was a bit of a Henry James groupie in my early teens, because I shared his fascination with cultural differences between Europe and America. My entry point to his work was Daisy Miller, which I would recommend to anyone who wants to dip their toes into his oeuvre. Overall, I probably enjoyed the works of his early and middle period more than the novels written in the early 20th century, but I did feel a certain satisfaction in working my way through the opacity and loquaciousness of The Golden Bowl or The Wings of the Dove, while The Ambassadors was possibly my favourite of his novels (perhaps because it is the most purely anthropological of his works). I would have to reread it now to see if that is still the case.

The American, however, never made it on my TBR list during my teens, but now that I read it I would say it is yet another good introduction to Henry James. It sometimes reads like a lighter-hearted prototype for The Ambassadors – although take light-hearted with a pinch of salt, since it includes heartbreak, revenge, solitude and death. It is far more plot-driven than his later works, and veers into melodrama, but it is also much easier to read and quite good fun.

Newman is a rather naive, easy-going American businessman, who’s made a great fortune in his country and is now curious to sample the delights of Europe. He is also not averse to finding himself a suitable wife, settle down and start a family. With a little prompting from his fellow Americans, the Tristrams, who are well ensconced in Parisian society, his eyes fall upon the beautiful young widow Claire. He soon befriends Claire’s younger brother Valentin, but the rest of the aristocratic Bellegarde family are very haughty and unwilling to ally themselves to someone in ‘commerce’ despite his fortune. At first he seems to gain their grudging approval for him to court Claire, but later on everything goes a little crazy with family secrets, betrayals, a duel and other such over-the-top scenes. What a contrast to his later work, where a raised eyebrow or a carefully constructed sentence contains all the drama required.

Newman is most definitely not a social climber – he does not seek acceptance in the aristocratic Parisian milieu. On the contrary, he would like to help Claire escape from her suffocating family and social circle. Yet I found it surprising that someone who is portrayed as essentially a kind-hearted person, dismayed by the snobbishness and coldness of the Bellegardes, would then display equal snobbishness and a judgemental attitude towards the young would-be painter (and most decidedly a social climber) Noémie Nioche and her anxious father.

But perhaps we are not meant to see Newman as quite such a positive character after all. There is a lack of reflection and depth in him, and one passage early on in the book sounds a little alarm (although this is Newman seen through the eyes of another character):

Newman was an excellent, generous fellow… certainly it was impossible not to like him… He liked everything, he accepted everything, he found amusement in everything; he was not discriminating , he had not a high tone. The young man from Dorchester accused Newman of a fault which he considered very grave… a want of ‘moral reaction’… The brevity of Newman’s judgements very often shocked and discomposed him. He had a way of damning people without farther appeal, or of pronouncing them capital company in the face of uncomfortable symptoms, which seemed unworthy of a man whose conscience had been properly cultivated.

As usual with James, what I enjoyed most were the observations and occasionally facile generalisations about European cultures and how they contrast with the American ‘soul’. This is how Newman describes Valentin, who soon becomes a good friend of his, despite their very different upbringings:

His talk was an odd mixture of almost boyish garrulity and of the reserve and discretion of the man of the world, and he seemed to Newman, as afterwards young members of the Latin races often seemed to him, now amusingly juvenile and now appallingly mature. In America, Newman reflected, lads of twenty-five and thirty have old heads and young hearts, or at least young morals; here they have young heads and very aged hearts, morals the most grizzled and wrinkled.

Bellegarde was the ideal Frenchman, the Frenchman of tradition and romance… Gallant, expansive, amusing, more pleased himself with the effect he produced than those for whom he produced it, a master of all the distinctively social virtues and a votary of all agreeable sensations… Bellegarde did not in the least cause him to modify his needful premise that all Frenchmen are of a frothy and imponderable substance; he simply reminded him that light materials may be beaten up into a most agreeable compound.

16 thoughts on “Henry James: The American”