Here are two crime novels which have recently helped me regain some joy and focus in my reading. I’m not sure that ‘crime’ is the best way to describe either of them, although crimes do take place (arson, robbery and murder, to name but a few). Neither of them follow the standard crime fiction formula – yet they couldn’t be more different from each other if they tried.

I am talking, of course, of Alan Melville’s Weekend at Thrackley (in the British Library classic crime series) and Chris Whitaker’s We Begin at the End, respectively. 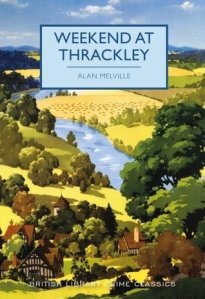 In the former, we have the typical Golden Age mystery novel set-up. Jim Henderson is a remarkably cheerful and stoic good chap, who has returned from war with all his limbs intact but without much work experience, and therefore struggles to find a job and make ends meet. To his great surprise, this underdog is invited to a country house weekend by someone who claims to have known his father, but whom he personally cannot remember at all. He goes there despite his misgivings, because his old school friend is also invited, and discovers a gloomy old house with an odd assortment of guests and a peculiar host obsessed by extravagant jewellery.

Most of the characters are paper thin, and the plot is rather obvious, but it’s all about derring-do and cute ironic observations, in that slightly bemused, self-deprecating style that was so common in the 1920s and 30s. I might argue that Jim and his friend Freddie, both public school boys, do somewhat fall into that cliche of ‘the nice, bumbling but well-intentioned and really quite bright underneath it all chaps’ which has done so much harm in class distinctions in Britain. However, it is encouraging that the hero of the story is the resourceful Jim rather than spoilt Freddie, i.e. the one who was raised by a single mother and who does not have easy access to a family fortune. 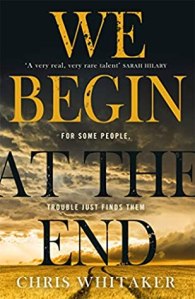 By way of contrast, Chris Whitaker’s characters are anything but spoilt. Thirteen year old Duchess Day Radley has to put up with things that no child should have to experience, as she struggles to protect her little brother and veers between pity and resentment at her perpetually depressed and drunk mother. This is life on the breadline, pretty much, and with no hope or escape in sight. Duchess is so used to being ignored, bullied, menaced, tricked, that she no longer can trust anyone or anything. She calls herself an outlaw and refuses to let anyone into her heart. She only half understands what is going on when the man who killed her aunt thirty years ago is released from prison and comes back to their home town, but she gets tragically caught up in the events that follow.

I’ve loved Chris Whitaker’s previous books, which described the same kind of milieu in small-town America, but this one is a shade darker, with far less black humour and fewer quirky characters to lighten the mood. I was afraid at times that the book was laying it too thick with all of the misfortunes that come the children’s way (almost like a Mexican soap), but it manages to avoid bathos. Crimes are just the pretext here for examining morality, how good intentions can lead you astray, how flawed every human being is and why standing idly by is sometimes as unforgivable as jumping in and making mistakes. A book I will not forget easily, although I’d have preferred to read it at a cheerier time. Just as well that I chased it down with the more puerile but easy-going BL classic!