If he had been European, Machado de Assis would undoubtedly be far better known. This 19th century Brazilian writer is completely original: the mixed-race grandson of former slaves, largely self-educated, who ended up receiving honours from the Brazilian Emperor. Yet has something of Balzac and Laurence Sterne, Charles Dickens and Stendhal about him too. He is a keen observer of society and its pretences but is fond of digressing and prevaricating. He creates memorable secondary characters that are almost caricatures, but also proves capable of great psychological insight into his main characters, and his narrators always end up revealing far more than they intend to the reader.

Dom Casmurro (Lord Grumpy might be an approximate translation of the title – and refers to the nickname of the narrator) is often classed as a realist novel, but to me it most resembles Tristram Shandy in its meandering structure and way of addressing the reader directly. Yet, despite the humour, the lasting feeling after finishing the book is melancholy and the sense of a life wasted. Written in the 1890s, the book goes back in time to the 1850s, when Brazil was still dominated by land-owning aristocracy only a step or so removed from Portuguese royalty, with the Catholic Church and senior clergy still supremely influential and all cultural fashions were imported from Europe.

Bento Santiago is the lonely, embittered old man of the title. He has meticulously recreated his childhood home in the centre of Rio somewhere out in the suburbs and in this book he is trying to make sense of the past, although he admits himself that he has a bad memory. But this is precisely what the author intends: to leave gaps for the readers to insert their own experience and make up their own minds.

For everything can be found outside a book with gaps in it, dear reader. Thus I fill in others’ lacunae; in this way too you can fill in mine.

This makes the book feel very fresh and modern. The witty chapter titles and self-deprecating style provide quite a contrast to what we might expect of this narrator who seems quite the old fuddy-duddy at first, seeking answers in his books, and expounding at length on various theories, most notably the famous analogy that life is like an opera, with God writing the libretto, and Satan as the composer.

… there are places where the words go one way, and the music another. There are people who maintain that that is precisely where the beauty of the composition lies, in its avoidance of monotony… Not infrequently, the same situations occur more than once, without sufficient justificiation. Certain motifs, indeed, weary the listener by overmuch repetition. Also, there are passages that are obscure; the composer uses the massed choruses too much, causing confusion and concealing the true meaning. The orchestral parts, however, are treated with great skill. Such is the opinion of impartial observers.

Yet, despite his pedantic, self-important style at times, Bento is also extremely candid with the reader, sharing his worst thoughts and impulses, almost committing public self-flagellation. He also cannot resist drawing our attention to the fact that he is being so honest, as if demanding the readers’ applause. The result can be very funny indeed, as in the chapter entitled Let’s Postpone Virtue:

Few would have the courage to confess that thought I had in the Rua de Matacavalos. I will confess everything of importance to my story… there is only one way of putting one’s essence onto paper, and that is by telling it all, the good and the bad. That is what I am doing, as I remember it and as it fits into the construction or reconstruction of my self. For example, now that I have recounted a sin, I would happily tell the story of some good deed done at that time, if I could remember one, but I can’t; it can wait for a better opportunity.

What I loved most of all about the book is how experimental and unpredictable it is, both in terms of style and of plot. Initially you believe it will be a Romeo and Juliet story, when Bento falls in love with the neighbours’ daughter Capitu, but they are forced apart because Bento’s mother has made a pact with God to make her son a priest if he is born healthy. Despite the young people’s scheming and co-opting of allies, Bento does end up going to the seminary but is saved from priesthood. He gets to marry the love of his life, but ruins his happiness through jealousy. You expect adultery or murder or a messy divorce – something dramatic. But in actual fact it’s Bento’s inner doubts and conflicts that prevent him from living his life to the full. 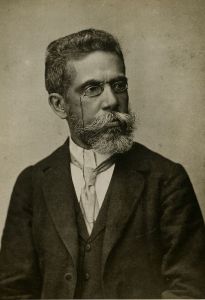 Dom Casmurro has also been interpreted as an allegory of life during the Brazilian Empire in the mid-nineteenth century, with patriarchal traditions and the dead through the church inculcating its citizens so powerfully that their thoughts remain stuck in the past, although their country is trying desperately to modernise. Bento is an empty vessel, to be filled by the thoughts and wants and desires of others. He has little autonomy, even when he believes he is acting independently.

There is so much more I could say about this book, but above all this: it defies expectations and is a great introduction to his work. It is a classic yet highly experimental, it is wistful, but also highly entertaining and readable, it is unmistakably Brazilian yet miles away from the lush exoticisim and tropicalia we see in Jorge Amado, for examploe. I read John Gledson’s translation published by the Oxford University Press.

Machado de Assis was always subtly subversive but seldom openly political in his writing. I’ve previously read a couple of his short story collections. A new translation of another of his books The Posthumous Memoirs of Brás Cubas by Flora Thomson-Deveaux has just been launched and I don’t know if I’ll be able to resist it.