June has always been my favourite month – lots of hours of daylight, my birthday, my younger son’s birthday, my older son’s nameday, and in my childhood it used to mark the end of school (no longer the case nowadays). So we had a lot of cake, and even a few drinks with online friends and even with real, grown-up friends in actual flesh, in my garden, in strategically placed chairs. What more could you want? 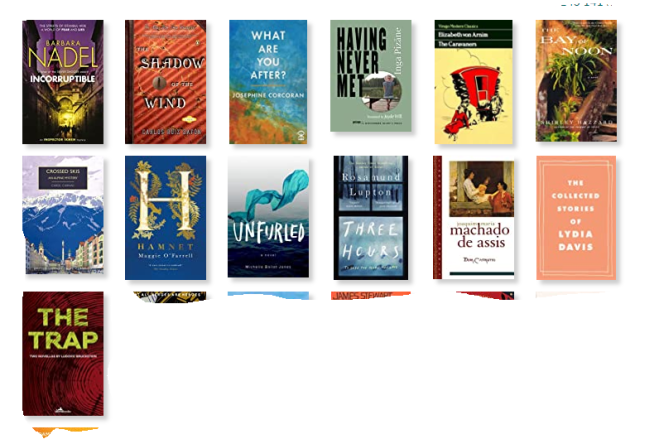 I really do believe I might have finally found my reading mojo which had been missing in action for months. I read 13 books this month (well, 12 to be precise, because one of them was a DNF, as mentioned below). Unusually for me, only four of the 13 books were translations, while ten were by women writers. Two were poetry collections, which require more attentive reading and rereading, but are shorter.  Of course, I still have to catch up with reviews. But here is what I have reviewed thus far, in case you missed it:

I was very pleased with myself that 11 of those were from my #20Books of Summer list! In fact, the only two exceptions were my Virtual Crime Book Club read (Three Hours by Rosamund Lupton) and a sort of in-memoriam read upon hearing of the death of Carlos Ruiz Zafon. The Shadow of the Wind has been enthusiastically recommended by so many people, and the theme of books and mystery and historical connections made me think I would love it. Sadly, this was the book I did not finish. I did give it a good thorough try: 246 pages, after which I realised I was finding it a bit of a slog, was never keen to get back to to it and I was in danger of losing my reading va-va-voom once more. The first few chapters were fun, but it all became a bit too sentimental, too repetitive, too clicheed and I lost interest in the characters and the big mystery.

Since my last round-up of films, I’ve watched a few more, all coincidentally with a ‘fish out of water’ theme.

Toni Erdmann – In addition to the often very funny cringeworthy moments and the painful father/daughter relationship, I thought this was an astute look at capitalism and corporate culture taking over both individual and national cultures. It felt like Maren Ade did an excellent job in understanding the endless patience, hospitality and desire to please the foreigners (no matter how crazy they might seem) of the Romanian people with which the main German characters interact.

The Past – Having previously been mesmerised (and saddened) by Asghar Farhadi’s A Separation, I thought it would be nice to follow it up with another of his films currently available on Mubi. A moving portrayal of relationship breakdown and family dynamics with only a light touch of cross-cultural misunderstandings, I was especially impressed by the child/teen actors.

The Shining – a rewatch with the boys, who don’t like horror films but quite like Stanley Kubrick. I haven’t read the book, but I understand why Kubrick made some changes in the script – and made it more psychological rather than supernatural.

Animal Crackers – struggle with this one, it just wasn’t to my taste. I never quite ‘got’ the humour of the Marx brothers as a child – always preferred Buster Keaton, Charlie Chaplin, Laurel and Hardy or Bourvil. And I clearly still don’t get on with it as a grown-up. There were a handful of witty repartees which I enjoyed, but not quite enough to make the film worthwhile.

Given my new incarnation as a literary translator who is going to be doing more than just the occasional one-off project, it’s not surprising that I’ve been keen to keep up with the very welcoming and utterly fascinating, cosmopolitan translation community. In addition to attending the Borderless Book Club and hearing translators and publishers talk about their choices, I have also attended some events aimed at translator audiences.

Daniel Hahn, Katy Derbyshire, Arunava Sinha talking about their current projects and changes to their routines during the Covid crisis, hosted by the Society of Authors

The W.G. Sebald Lecture given by David Bellos – in which he dispelled what he called the ‘myths of translation’, which are a combination of wishful thinking and confirmation bias, and ultimately not that helpful to translators.

I am planning to read a lot of Women in Translation for August, and thought I might start a bit early, to combine with Stu Jallen’s Spanish Literature Month (which includes Latin American literature). I’ve got Ariana Harwicz (Argentina), Lina Meruane (Chile), Liliana Colanzi (Bolivia) and Margarita Garcia Robayo (Colombia) on the TBR pile.

25 thoughts on “Summary of June Reading And Other Good Things”