You don’t often get to see the First World War from the Balkan perspective, so Istros Books‘ publication of this monumental doorstopper of a novel, translated from the Serbian by Will Firth, deserves a round of applause. I was sent this book for review at Necessary Fiction quite a while ago, but to my shame I never got around to it. I have now come across my rather impressionistic review notes and am at least publishing them on my blog (far smaller fry, I do realise), because I can’t do much editing or updating directly online at the moment, but I can just about cut and paste a Word document (it only takes about an hour or two, which is far too long for such a simple process).

A word of warning to all readers expecting a concise picture of life during WW1: this is a much longer and more ambitious book, a broad canvas aiming to cover all the diversity of experience of the First World War. It would be wrong to call it a collection of short stories or vignettes either, as characters and stories emerge, repeat with variations, are built upon and thus swell into a musical theme within an orchestra that for the most part remains tuneful. To continue with the metaphor, we find just the occasional cacophonous confusion.

We encounter here a  vast array of characters of all nationalities, from all walks of life, all occupations, both genders, all ages. Some of the characters are historical, although their stories have more than a touch of the apocryphal and fantastical. You will come across Archduke Franz-Ferdinand and his wife having a conversation in the mortuary after their assassination; Jean Cocteau gorging himself with buckshot so that he will attain the minimum weight to enlist in the army; even Rasputin and Lance Corporal Hitler make an appearance. But it is predominantly the story of ordinary folk –  hustlers, con men, pimps, soldiers, volunteers for the Serbia Blue Cross, tradesmen in Istanbul  – and their more fortunate or wealthy peers: opera singers, society beauties, students, industrialists, doctors.

An aura of doom and the burden of history permeate this work, lightened every now and then with odd anecdotes, touches of humour, human-interest stories.  The initial conviction that ‘one shot, one shout and one charge would resolve everything’ gradually gives way to incompetence of the military commanders, failures of the Red Cross, disillusionment of ordinary soldiers and civilians.

Here are a few scenes which particularly stuck to my mind:

Major Miyushkovich’s beloved wife Ruzha abandons him on the first day of war. He dies heroically in battle.

Russian muzhik soldiers severely wounded, given painkillers in hospital, suddenly start speaking German, discoursing on erudite topics. However, the author points out that ‘men groaned and died in the same language – in the east and in the west’.

A young Polish student and a girl dying of tuberculosis find love and refuge, squatting in a Parisian apartment whose owners have fled . They scavenge for food and make love like the last people on earth. They have one week of happiness before death and the military strike them down.

Fritz Krupp, wannabe artist with insufficient talent (shades of later world wars there?, despises Picasso and the others who have made a creative home in Paris. So he becomes a bomber pilot, keen to bomb Montmartre and Montparnasse into oblivion.

The humour and lightness of the early anecdotes give way to descriptions of the relentless drudgery, harsh winters, typhus epidemics of later years. There are grotesque touches like the horse with dogs in his belly, being fed them with minced meat from dead comrades (a form of horse cannibalism, which is shocking but sadly all to believable).

Fritz Haber is a German chemist who produces poison gas to better serve his country (yes, he has bought into all that ideological discourse). A little cloud of chlorine from Ypres mounts up and travels all the way to Karlsruhe and kills his wife Clara, who was opposed to his using science to bring about death.

Not even the end of the war holds much hope, because, as we now know, the lessons were not learnt from its unclear, messy ending. And then the Spanish Flu in its immediate aftermath: the smallest and most sinister anti-hero of this novel, who does not distinguish good from evil, who attacks with abandon.

A book to dip into and read over a longer period of time, rather than straight through from cover to cover, it provides an alternative picture to the First World War, quite different from the dominant Anglo-French interpretation. A necessary read, indeed!

I could almost claim 14 books for April – except that one of them has been so massive that I am still reading it, and will be reading it for many months to come! That is, of course, Genji Monogatari (Tale of Genji), which I’m reading along with brave Akylina.

Of the remaining thirteen, I had another epic doorstop of a book: The Great War by Aleksandar Gatalica. You will find the full review on Necessary Fiction website shortly. This website, incidentally, is well worth a look for its thoughtful reviews of lesser-known authors and short story collections, its research and translation notes, and writer-in-residence feature. For now, let me just say this book is an ambitious, sprawling, almost encylopedic collection of stories and characters, from all the different sides fighting the First World War. Touching, humorous and ever so slightly surreal.

Six books were in my preferred genre, crime fiction. If you’ve missed any of the reviews, they are linked below (all except Cry Wolf, which I was not sufficiently enthusiastic about).

Sarah Hilary: No Other Darkness

My Crime Fiction Pick of the Month, as hosted by Kerrie at Mysteries in Paradise, is very, very tough, as Child 44, No Other Darkness and Pleasantville are all jostling for position. So this time I think I’ll go for the one that kept me awake all night to finish it, which was Child 44. I saw the film as well this weekend, which simplifies some of the story lines and emphasises perhaps different aspects than I would have (if I’d written the screenplay – the author was not involved in it either). But I enjoyed it, and the actors were really impressive. If you want to see an interesting discussion of book vs. film adaptations, check out Margot’s latest blog post.

Meanwhile, Pleasantville fulfills my North American requirement for the Global Reading Challenge – I don’t often get to read something set in Houston, Texas.

A lot of online poetry this month (after all, it is National Poetry Month for the Americans) and I’ve also started a poetry course organised by the Iowa Writers’ Workshop. But, surprisingly, I haven’t read any poetry collection.

However, I did read a non-fiction book, the funny yet thoughtful essay collection with the irresistible title 100 Essays I Don’t Have Time to Write.

Three of the books I read this month fit into the historical fiction category, but the one I want to highlight is Fire Flowers by Ben Byrne, which gives such a poignant description of post-war Japan, something few of us know about.

Alongside the two translated books (from Swedish and classical Japanese), I also read four books in French (well above my monthly target of 1-2). These were Yasmina Khadra’s L’attentat, Philippe Besson’s La maison atlantique and Virginie Despentes’ Teen Spirit (which I’ve reviewed all together here). I also read Metin Arditi’s rather chilling description of a Swiss boarding-school for boys Loin des bras.

So, all in all, a good month of reading. Although some books felt a bit average, there were quite a few that impressed me. At least I no longer feel obliged to write lengthy book reviews about those I didn’t quite gel with (or even finish them). And I’m pleased that I am spending some time in Genji’s company again. It helps to slow down my world and see things from a very different angle.

In terms of writing, I’ve been less successful. School holidays and business travel have wreaked their usual havoc. I have, however, solved outstanding plot holes and know very clearly where everything is heading now. I have the post-it note wall to prove it! Although I’m still open to allowing my characters to surprise me a little… 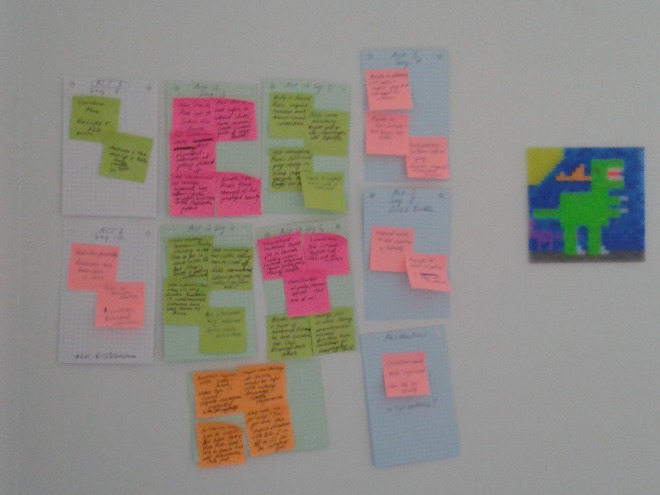 So, how has your April been in terms of reading and writing? Any must-read books (dare I ask that question, dare I be tempted)? Anything you felt was overrated or overhyped? Let me know below!

I’m on another business trip and therefore falling behind on my writing and reviewing, so be warned… This is going to be the world’s most boring blog post, mostly a reminder to self what I have read and reviewed, what still needs reviewing… yes, a To Do list!

I started off the week with a review of Child 44 – the book, rather than the film. The book was written 7 years or so ago, but I was wary of reading it because descriptions of totalitarian regimes disturb me in a way that any number of dark crime fiction thrillers cannot. And this one combines Stalinist Soviet Union with a serial killer and graphic scenes of torture? Oh, no, thank you, I thought. Yet, with the film coming out now (haven’t seen it yet, but it looks compelling) and after meeting Tom Rob Smith in Lyon, I plunged right in. It’s a wild ride: I sat up till the early hours of the morning to finish it and that doesn’t happen very often. Yes, there are minor niggles about how faithful the portrayal of fear and belief in a an oppressive state system really is, but suspend your disbelief and enjoy the thrill!

I’m also rather proud of my introduction to Latin American crime fiction. It’s not that easy to find translations into English, but I did my best with what I had. Some I’ve read, some I’ve only read about and researched – but you bet I now want to read them all!

Then there are all those books weighing on my conscience:

1) epic and encyclopedic The Great War by Aleksandar Gatalica needs to be reviewed by the end of this month, preferably this week.

2) Natsume Soseki’s Light and Dark has been on my bedside table since January and I’m still not nearing the end. It is so much like Henry James’s later works and I’m struggling with all the tiny details, that I wonder if I would be able to read James again nowadays.

3) Ben Byrne’s Fire Flowers introduced me to post-war Japan – and I want to write something about Japan’s experience of WW2 and how it’s been portrayed in both Japanese literature and abroad. I wrote something similar in my B.A. thesis, but that was a loooong while ago.

4) Three new to me authors this month: Virginie Despentes, Yasmina Khadra and Karin Alvtegen. I enjoyed their books (well, ‘enjoy’ is perhaps the wrong word to use, as each of their novels is harrowing in its own way), but I wasn’t completely bowled over. Yet. I do want to read more of them before I make up my mind, though.

5) I haven’t progressed much with Tale of Genji – well, it’s a very THICK book and not easy to take with you on a trip…

6) I keep trying to resist the siren song of new releases, but I really, really want to read Sarah Hilary’s No Other Darkness. So that is next on my TBR list, along with Philippe Besson, recommended by none other than Emma from Book Around the Corner.

Next week there’s no business trip coming up, the children go back to school and hopefully there’ll be time for reviewing as well as that all-important, now-critical writing!