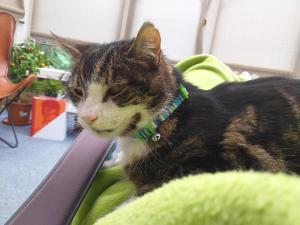 We got our new cat Barney on the day the lockdown started in the UK on the 23rd of March. In the five and a half weeks since (has it really only been that long – it feels like at least two months!), we have just about managed to get them accustomed to each other (or should that be resigned?), but I’m not sure they will ever be friends. Part of that is their age of course (Zoe is eight and has been our only cat for six years, while Barney is fifteen), part of it their personalities, but I can’t help thinking that their very different life experience may have also had an effect.

Hear me out and indulge my fancy.

Zoe was born somewhere on the Franco-Swiss border and left by the side of the road in a bin bag with her other siblings. She has an aversion to bin bags to this day and suckles up to me constantly, a sign she was probably taken too soon from her mother. She was found by a homeless man and became his companion for a couple of years, until he found a place in a shelter or housing project and she ended up in a refuge. This means she learnt to bond with one person – and one person only. She gradually became Mummy’s girl, even though it took her nearly a year and a broken marriage to finally come on my lap, but she was initially not very accepting of anyone else. She has now included the boys in her ‘loved people bubble’ but is still frightened of other humans. As for other cats – forget it! She is deeply, deeply suspicious of them – perhaps a sign that she was bullied on the streets. Since we moved back to the UK, she has refused to befriend any of the cats in our close, despite some friendly advances on their part initially.

For Barney we have a precise date of birth. He was adopted (possibly together with a sibling) as a kitten and has been cherished and looked after all his life. He lived with another cat in the house, so he is predisposed to make friends with the other cats in the close. He is calm, laid back, friendly with everyone but not too clingy. He had a momentary glitch in his good fortune when his owner went into a care home and he was left to fend for himself. But after a few weeks in a foster home, he found himself yet more willing slaves – three of them now, instead of just one. And he has never attacked Zoe or even hissed at her, only occasionally creeping under the sofa when he thinks she might be on the rampage.

On the face of it, Barney is easier to love and get along with, but how much of that is thanks to his privileged background? How many of Zoe’s instances of aloofness and acts of aggression are really about a traumatised little girl not quite daring to believe her current good fortune is permanent (even though it’s been three quarters of her life by now)? I don’t know if the homeless man mistreated her, but she certainly backs down very quickly and guiltily if you raise your voice even just a little. She has never damaged anything in the house or climbed where she wasn’t supposed to go. Meanwhile, easygoing Barney nonchalantly pees in other people’s litter trays or jumps up on the kitchen counter and try to gnaw his way into the breadbasket.

Claudia Rankine’s defence of Serena Williams in her wonderful ‘poetry’ volume Citizen opened my eyes to the cumulative effects of countless micro-aggressions. All these might lead to a chip on the shoulder, to a belligerent personality that some people consider strident, to a question in parliament or a business meeting that may be waved away with a smile and a ‘Calm down, dear’. Meanwhile, charming and venerable older gentleman Barney has wrapped us all around his white paws, and wreaks havoc.

Well, I hope not, I hope this is where the extended analogy ends. But, now and always, I am the side of those who lack privileges and the easy life. This is not a conflict, but if it were, I am Team Zoe.