I have recently read three very different crime novels, which left me intrigued, delighted and frustrated (in that order). They also made me wonder if the publisher’s pressure to produce a book a year forces writers to compromise on quality at times. Because I would rather wait two-three years if it means a more thoughtful, original piece of work is produced, rather than a cut and paste job with stock situations, cardboard characters and clichés ahoy.

This refers of course to the book which disappointed me, which used all the possible tricks to turn a rather ordinary, overdone story into something suspenseful: an unnecessary dual timeline solely designed to increase suspense, but feeling unnatural and irritating; withholding of vital information to create plot twists; an utterly pointless final twist with little bearing on the story; an annoying, whining main character whose behaviour is exaggerated and lacks credibility. Yet there were certain sharp observations throughout the book which made me think the author had talent, but had hurriedly scribbled down a half-baked domestic noir story to satisfy the current appetite for that sub-genre and the publisher’s demands.

The book which intrigued me was Andrée A. Michaud’s Bondrée (Boundary, in English, translated by Donald Winkler). Michaud is Québécois and this novel is very precisely set in time and place: a summer community on the US/Canadian border of Lake Boundary during the summer of 1967. Life seems idyllic: barbecues sizzling, children playing on the beach, families relaxing at weekends, even if the men have to go back to the city to work during the week. Radios are playing ‘Lucy in the Sky with Diamonds’ and ‘A Whiter Shade of Pale’, and two teenage girls are flaunting their gorgeous tanned bodies and long curls to confuse and delight the male population of the little holiday enclave. Zaza Mulligan and Sissy Morgan are precocious and slightly too forward. In a year or two they would be destined to become bitches, so the gossip goes, but this is their summer of glory, with a third girl Frenchie Lamar trying to keep up with them, but not quite succeeding to emulate their charisma. Meanwhile, twelve-year old French speaker Andrée is entranced by these American teenagers, the sweets they share with her because they think she is cute. She tries to repeat the words they say ‘Littoldolle’ or ‘chiz’ or ‘foc’ (which her mother tries to avoid explaining to her by discussing seals – in French  ‘phoques’ – instead). She is the main narrator, but it is not really a child’s voice, but a scene remembered from the distant past. We also catch glimpses of the story from other points of view.

Then Zaza is found dead, her limbs torn apart in an old bear trap overgrown with vegetation. An unfortunate accident, so everyone thinks, and the holiday-makers band together to search for all remaining animal traps which a strange old hermit called Pierre Landry had set up around the area before he died. But when Sissy suffers a similar fate and her beautiful red hair is cut off, the community has to acknowledge the horrible truth:

A killer was on the loose in the shadow of our cottages, one who had made a zombie out of Bob, and etched into my father’s face lines that hadn’t been there before, outward signs of a kind of stupor, as if he’d received a blow from a baseball bat on the back of his head. And that’s exactly what had happened in the clearing, where a dozen men, along with him, had been blindsided by a mysterious weapon.

Stan Michaud is the American policeman who has to investigate the case, helped by Brian Larue, a bilingual single dad vacationing there, who helps with the translating. The story is very slow-moving, perhaps too much so for avid mystery fans, but it is also a subtle coming-of-age story and a description of an Anglo-French community on the cusp of modernity yet stuck in a primeval forest full of ghosts. I was fully caught up in the utterly believable atmosphere, full of nuances and poetic language. The translation did occasionally feel clunky, so I may well look out for this in French. It won the Prix des lecteurs (Readers’ Prize) at the Quais du polar in Lyon this year. 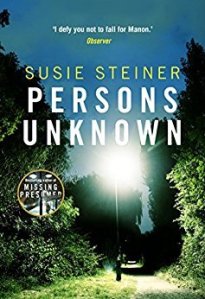 Finally, the book which delighted me is the follow-up to Susie Steiner’s debut, which I reviewed recently. In Persons Unknown, Manon is back in Cambridgeshire, together with her unconventional family: her adopted son Fly, her sister Ellie and her young nephew Solly. She is sidelined somewhat, working on cold cases, but she hopes it gives Fly the opportunity to grow up in a more peaceful environment, where he won’t be treated as a criminal simply because of his race.

But then a man is stabbed to death outside a park near the railway station and the identity of the victim makes it impossible for Manon to ignore the case. Things go from bad to worse and she has to prove that her nearest and dearest cannot possibly have anything to do with this horror. Or could they? This seamless blend of personal and professional is Steiner’s great strength, the way in which she makes us question all of our easy assumptions about family, motherhood and love. Each character seems well-rounded, with real depth, especially Manon, who feels like a frazzled yet slightly more energetic version of ourselves. The target audience for this is the reader who enjoyed the more realistic portrayal of women detectives such as Elly Griffith’s Ruth Galloway series (although I like this one more) or the feisty Sarah Lancashire character in Happy Valley.

Now you may say I am contradicting myself, since Persons Unknown has followed very swiftly on the tail of Missing, Presumed. However, it feels to me like this was a single, complex story that the author had already envisaged, and which she brought out in two installments. It all fits together very well, and there are hints that the third novel also builds on this story. For the sake of letting stories breathe and develop organically, however, I would ask publishers to ease the calendar pressure and allow authors to take as long as they need to make their novels as good as they can.