I haven’t gone quite as crazy watching films nearly every day in July, as I did in the previous few months, mainly because I find my eyes (and head and back) are really fed up of watching screens, regardless of size and position. So I prefer to collapse in bed and read in the evening. However, most of the films I’ve watched have been directed by women. And now that I look back, I notice the vast majority are French. Also, not sure if it proves anything, but quite a number of women film-makers on this list started out as actresses.

Tales of the Unexpected:

Ida Lupino: The Hitchhiker – such a minimalist, brutal noir film, it certainly puts an end to any notion that women directors are all fluffy and domestic. It is a relentless road trip to hell through a parched landscape, with no shelter, and a cast of just three men, all wonderfully expressive (and sinister) actors. A wonderful sense of menace looms over the entire film, although the ending is a little bit too neat and rushed.

Michaela Coel: I May Destroy You – tough to watch at times, but how could it not be, when it deals with the consequences of sexual assault? Nevertheless, it manages to be funny, poignant and militant as well. The main character Arabella is both endearing and infuriating, and it’s very clever that Coel doesn’t make her too likeable – but she does NOT deserve what happens to her. There are so many layers to the story as well: what does constitute rape and assault? who are our real friends and what are the boundaries of friendship? and other weighty themes such as betrayal and forgiveness, race relations, social media and trolling.  And it shows black people having fun as well as suffering, which is so rare… As for that ending… a wonderful surprise!

Celine Sciamma: Girlhood (Bande de filles)  –  I cannot believe that I’d forgotten that I’d seen this film when it first came out in France. As soon as I saw those endless concrete footbridges between the blocks of flats, it all came flooding back. This is the feminine version of La Haine, a portrait of black girls living in the banlieues and trying to make the most of their short period of bloom before life, misogynistic men and hopelessness take over. While I cannot condone their shoplifting and bullying, there are real moments of tenderness and ‘rire fou’ (crazy laughter) between the girls (all newcomers to acting at the time) and of course that unforgettable scene of dancing and lipsynching to Rihanna. 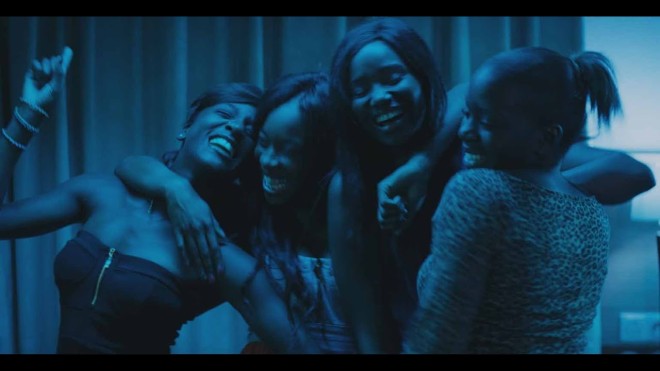 Joanna Hogg: The Souvenir – almost the polar opposite of Sciamma’s film, this shows pretentious film students and a very genteel, soft-spoken, well-heeled environment. And yet the well-meaning but naive girl at the centre of the story is as open to emotional abuse as the poor banlieue girls. And, although she has the safety net of her family, she doesn’t have that sense of solidarity and loyalty that the Sciamma girls display.

Claire Denis: Let the Sunshine In (Un beau soleil intérieur) – Juliette Binoche making stupid choices with lots of creepy men, in an attempt to ward off loneliness and the feeling of ageing, would be my capsule summary of this film. There was little joy or freedom apparent in this film – it smacked of desperation.

Mia Hansen-Love: Things to Come (L’Avenir) – Same theme, nearly: a middle-aged philosophy professor sees her world come crashing down: a husband who suddenly announces he’s having an affair and is moving out, a difficult mother who needs constant care, a cat she inherits although she has an allergy, being turned down by publishers because her books are no longer considered ‘marketable’, being considered old-fashioned by her former pupils. And yet the character played by Isabelle Huppert has the inner strength to keep going and even enjoys her freedom and reaches some form of contentment.

Chantal Akerman: Almayer’s Folly – based on Joseph Conrad’s first novel but set in an unspecified post WW2 time period, this is the story of a white man dreaming of making a fortune in the East, yet ending up penniless in a house overgrown by vegetation, in the middle of a river. He looks down on the natives, although he has a mixed-race daughter. He refuses to admit that his daughter doesn’t fit in the white people’s world and is doomed to eternal disappointment and being wrong about everything. A slow-moving film, with very long shots throughout, bogging you down like the swampland in which he lives.

Eléonore Pourriat: I Am Not an Easy Man (Je ne suis pas un homme facile) – a rom-com with role reversals. The very macho philanderer Damien suffers a major concussion and wakes up in a parallel universe where women are the dominant sex, men have to dress to please them, are mostly in subservient roles and are discriminated against. A very clever and funny premise to demonstrate the absurdity of the expectations we have of women, but I did feel the romance overpowered the satire. I’d have liked to see more of the role reversal in the workplace, too. If you want to see the original 10 minute mini-film made by the same director (which let men experience what life is like for women), you can watch Majorité opprimée on YouTube: https://youtu.be/kpfaza-Mw4I 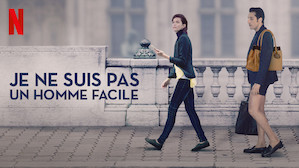