It’s been such a busy week once more and perpetual exhaustion seems to be the general frame of mind for me. So no new reviews, not even a summary of the many films I’ve watched in the last fortnight. Merely my grandmother’s favourite animal to look at and cuddle. Initially, I was scared of the piglets, because they would follow me everywhere. Now, I’ve grown to love them, not just because they are cute (and surprisingly clean) but because they are also very intelligent and trainable, like dogs.

Chateaux and the like are all very well, but where do beleaguered artists go when they need to focus on their writing/art/belly button? As far away from the temptations of civilisation and the Internet as possible, of course.

Any of the above catch your fancy?

After a series of gruelling (though riveting) reads in April, I opted for the comfort factor and chose some lighter reads this month, all by women writers.

Jason Fitger is a professor of creative writing at a small, second-rate college, who feels he is spending most of his time writing references rather than getting any real work done. His department is facing serious cuts, he’s made a mess of his personal life, his literary ambitions have been thwarted and his views on his students’ abilities, their job prospects and future are painfully funny. Written as a series of letters (and the occasional online form) of recommendation, this will bring a broad smile of recognition (and an occasional pang) to anyone who has ever worked in academia (or anyone involved with writers). A short, satirical book, with a narrator full of pompous self-justification and whingeing, who is unintentionally funny – a delightful way to pass a lazy afternoon. I read it in one sitting, because, having been a victim of endless bureaucracy myself, I kept saying: ‘Just one more letter…’

Another early Fitzgerald book, this one was recommended by fellow bloggers and writers Hollyanne, Cleopatra and Kate Evans.

Despite the macabre and serious subject matter, this was such a zany, fun read. Fitzgerald has a deceptively easy, free-flowing style that makes you think ‘chick-lit’ at first glance. But no chick lit would feature a storyline in which the main protagonist, Catriona, ties up loose ends before her wedding by contacting each one of her former boyfriends, having one last farewell bout of sex with them (usually while being completely drunk) and then discovering their mutilated bodies shortly afterwards. Needless to say, Catriona is the prime suspect and, in an interesting reversal of timeline expectations, we get to hear most of the story in retrospective, while she is in jail on remand. A journalist wants to write a trashy biography of her, hilariously misinterpreting or cherry-picking from interviews with former friends and family. Catriona contrasts the biography with her own recollection of events, but we suspect her own interpretations are sometimes unreliable, while her memory of her last encounters with her exes are hazy, to say the least.

I did guess the final plot twist, but to me this book is not about the twists and turns of a criminal investigation, but about the fresh, original voice.The frank, no holds barred language and messed-up characters, the deft characterisation and sly asides: this seems a stormy assault on British restraint (Fitzgerald comes from Australia originally, but has now settled in Scotland), yet at the same time has a lot of self-deprecating humour that is forever British to me.

Louise Penny: How the Light Gets In

This doesn’t quite qualify as light reading, as it’s full of tension and drama. I’ve read the Armand Gamache series out of order and this was one I’d missed out on. There are two murder mysteries involved, plus a larger conspiracy involving Gamache’s boss (building on from previous books in the series). The conspiracy element did perhaps feel exaggerated, leading to the very top of Quebecois politics (not sure how well-received this particular book was in Quebec).  However, it certainly led to some very tense moments and real sadness when we realised how a wedge has been driven between Gamache and his former sidekick Beauvoir. The ‘proper’ investigation took second place to this drama, but had an additional poignant word to say about what goes on under the ‘happy families’ façade.

The reason why I have included it in my ‘escapism’ fiction is because it is such a delight to revisit the village of Three Pines in the company of Louise Penny and her fictional characters: the grumpy poet and her duck, the artist, the wise bookseller, the big-mouthed but warm-hearted gay couple running the B&B… these are not types, but over the course of many books have become our friends. We know their quirks intimately, yet they always manage to surprise us a little. I want to live in Three Pines, as do most of Louise Penny’s faithful readers, although I may have to give up on the Internet forever (no signal).

Have you read any of these books and what did you think of them? And do you like to alternate harder reads with more light-hearted or escapist ones? What comfort reads do you turn to?

Is there any writer out there who doesn’t love stationery? Of course, there are plenty of stationery lovers who are not writers (just hoarders or designers or… procrastinators), so there is no immediate causal link there.

Based on a conversation we started over at dVerse Poets Pub about the tools we really need as poets, I collected a few of my favourite things in this post.

1) Of course I appreciate Moleskine and the reinvention of a brand, but my personal favourite is much simpler and cheaper. Rhodia notebooks have been the smoothest writing experience in France for 80 years now. They have all sorts of ‘nouveautés’ (novelties) every year, but I just stock up on their most basic black or orange note-blocks.

2) I like high-quality fountain pens. In fact, I have my eye on a Montblanc Virginia Woolf pen when I sign my publishing contract – or perhaps for autographing my books.

3) However, more realistically and practically, I bulk-buy Pilot G2 gel rollerballs. They work really well with the slippery-smooth Rhodia pages.

4) I’ve just discovered these rather funky notebooks from Huck and Pucker. An elastic to keep them closed is always a good idea and of course I’m bookish and proud of it!

5) Finally, a trip to London always means a stopover at Paperchase on Tottenham Court Road: a stationery-lover’s idea of heaven. Sadly, they seem to have discontinued (at least online) my favourite notebook type, so you’ll have to make do with my own pictures. It’s a chunky A5 notebook with elastic, colourful plastic covers, 5 sections (lined, squared and blank) with dividers (with pockets to stuff notes in), plus more plastic covers and a zipped purse at the back. Just the most practical, wonderful notebook ever: I carry my whole life around in it! Paperchase, please, please bring it back! 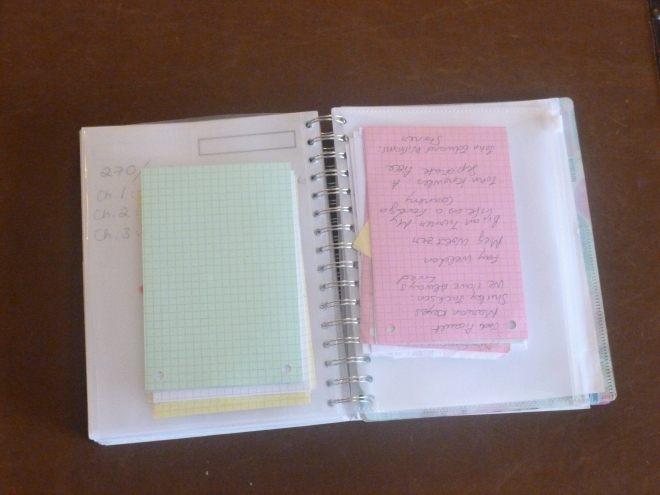 Apparently there is such a thing as National Stationery Week and it’s this week. So, let me know what your ‘cannot live without’ items of stationery are. Do you hoard lots of pretty (and empty) notebooks? Oh, and point me in the direction of your luxury items too, while we are on the subject…

The holidays have started, so I’m dreaming of faraway places… None of which will be my destination this summer, but heigh-ho… some day…

Finally: it may be the wrong season, but just how atmospheric is this pool?

Castles in Spain, chateaux in France, what’s the difference? Somewhere to dream, explore, write – and never mind the renovation work required.  Happy Bank Holiday, for those who are in the UK, and hope the weather will be better than our soaked holidays to date…

I’ve included the last picture although the image is less clear because this one is quite a special house (and it is more of a modest manor house than a chateau): it was David Bowie’s house on the hills above Lausanne for 10 years and it has appeared in the Claude Chabrol film ‘Merci pour le chocolat’.

The weather is set to change to rain and snow this weekend, but just before it does, what better place to escape to than the height of a tree? From there we can watch all the flowers peek out their cautious heads, listen to birdsong and read our favourite books of course. On her wonderful crime fiction blog, Margot Kinberg recently mentioned places where detectives could retreat and recover from their hectic jobs. Sheds, boats, orchid rooms… We both agreed we would love to hear of a treehouse-dwelling sleuth. Do let us know if you’ve heard of one, won’t you?

Here are some tree houses that he/she might like to try out… Something for every taste, modern to traditional, mansion to modest dimensions. I suppose it’s something to do with our hunter/gatherer roots, that we are so attracted to tree houses.

So indulge me… Allow me to curl up in a well-travelled vintage room, with lots of books, armchairs, plaid blankets and plenty of cushions. An open fire and a mulled wine would be optional, but deliciously thoughtful.

A cosy bedroom would not come amiss, even if it were designed with teenagers in mind…

But, for the ultimate retreat, while there is still snow in the mountains, I would like to hide up in this Swiss eco-pod hut in Flims and do nothing but read and write.

Now for something completely different at the weekend. Here are a few of my Favourite Things (in the John Coltrane version):

The mountains in winter…

New ways to store books, while having them close to hand… 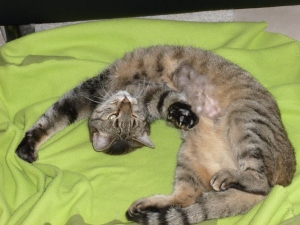 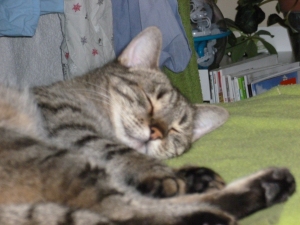 And a certain very agile cat, whose beauty I haven’t quite learnt how to capture yet…