The following books all fall into the category: enjoyable but not enough time to review them fully (perhaps not outstandingly ‘different’ and memorable enough to make me find the time for complete reviews).

Alan Turing dies in Wilmslow, just outside Manchester, by eating a cyanide-laced apple. Was it suicide or murder? This odd mix of detective story and spy thriller speculates on his demise. It’s not badly written and evokes that atmosphere of suspicion and one-upmanship of the 1950s Cold War very well, but I don’t quite see the point of it. The Turing story is by now quite well-known, so it’s really more about the interior journey of one man – the policeman Leonard Corell – who becomes fascinated with Turing and saddened by his life and death. He initially recoils from homosexuality but ultimately can relate to Turing’s misfit status. It does read at times like a treatise on maths and computer science, and the ending is a bit of a nonentity. I then saw the film with Cumberbatch as Turing and was a bit disappointed at the portrayal of Turing as a geek. Difficult he may have been, but there was far more to him than an almost autistic devotion to science and a lack of humour.

Nicci French: Friday on My Mind

The fifth in the Frieda Klein series and I still enjoy Frieda’s moodiness and the descriptions of hidden London (including its underground rivers). But she does do some reckless and silly things which in real life would lead to her being instantly charged and imprisoned. So it was a welcome addition to the investigative team to have a new female detective to view Frieda a little more objectively (and coldly). Above all, I liked the way the authors tackled head-on the ambiguity of grief and the guilt of losing someone one once loved but no longer does.

Not my usual reading matter at all, although I do like the more unusual science fiction of Asimov, John Wyndham, Ursula Le Guin and Iain M. Banks. This is a hypnotic and disturbing book about the limits of human comprehension, the tricks our mind can play on us, about whether it’s ever possible to understand and accept the ‘other’, how misunderstandings can lead to escalation of conflict. So, all worthy themes, but too many didactic bits, physics explanations etc. to really grab me. I think I prefer the Tarkovsky version, which apparently Lem described as ‘got it all wrong – it’s not a Love Story set in Space’.
Glad to see it translated properly and accurately into English now, though, rather than via a French translation. 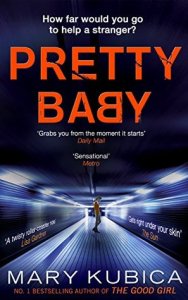 A typical suburban family suddenly finds itself careening out of control as they take in a young runaway girl and her baby. This novel speaks to the fears and contradictions in all of us: wanting a comfortable lifestyle vs. wanting to help, trusting vs. being suspicious, frustrations of parenting vs. frustrations of married life and much more. Clever characterisation, with viewpoints shifting from one character to another, until I felt sorry for all of them. Readers who say that the characters are unsympathetic must score very highly on self-esteem, as I recognise many of the thoughts and anxieties of the people in the book – albeit heightened, of course, that’s why it’s a thriller! I did foresee some but not all of the developments, but more than anything it’s a study in disappointment and frustration rather than a straightforward thriller, despite its explosive finale. I’ve tipped Mary Kubica as a woman author to watch on the CFL website and certainly look forward to reading more by her.