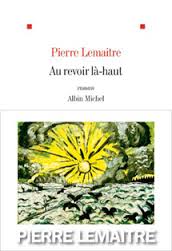 France’s most prestigious literary prize is the Prix Goncourt. It’s awarded each year in November, and (like the Booker in the UK and the Pulitzer in the US) there is much suspense beforehand… and much dismay and controversy afterwards. 2013 saw the win of Pierre Lemaitre’s World War One epic. I had previously read (and enjoyed) Lemaitre’s crime fiction and it seems to me that much of the consternation about his win has to do with genre snobbery. This book is just too readable, too much of a page-turner to be a novel of real literary merit… it’s just not ‘difficult’ enough.

And that is exactly why I loved it. It makes sense of a difficult subject like the end of the First World War, with its inglorious aftermath of black marketeering, petty cons, appalling treatment of war veterans, rising materialism and cynicism. The first sentence immediately sets the scene:

Those who thought the war would soon be over had all died long ago. In the war, of course. (my transl.)

But it also shows just how difficult this book will be to translate. The short ‘de la guerre’ could mean ‘because of’ the war, ‘from’ the war or ‘in’ the war. The title of the book itself is taken from the farewell letter written by a young soldier Jean Blanchard, who was unjustly executed for treason in 1914: ‘Till we meet again (up there), my dear wife…’. I will be very curious to see what catchy but faithful title the publisher will be able to come up with.

In the very last days of the war, the egotistic Lieutenant d’Aulnay-Pradelle (that double-barrel name is very important to him and says it all about this unpleasant character) orders a pointless patrol and attack which nearly kills two soldiers, the artistic Edouard and the practical Albert. Edouard saves Albert’s life and, in turn, Albert tends to Edouard in hospital. The latter is so badly injured that he can no longer talk and becomes hooked on morphine. He wants to disappear, to take on another identity, even if that causes distress to his family, and Albert helps him with that. This odd couple then try to survive in a post-war world which is all rhetoric of gratitude towards the ‘poilus’ (the soldiers of WW1), but in practice has little kindness or compensation for them, and makes no effort to help them to reintegrate into society. So they embark upon a rather desperate con trick to make money, but they turn out to be nothing like as ruthless as their nemesis Pradelle proves to be with the war graves.

Much of this story is true, but the author brings forth his meticulous research with a light touch. The characters and the situations flow with the ease, satire and excitement of a soap opera. But a soap opera that is more reminiscent of Balzac and Zola, with macabre moments, very dark humour and real cruelty, as well as rather beautifully written passages. A book which reminds us that wars can turn any of us into monsters, and that is consequences are prolonged and unsavoury. It’s a long book, but it just swept me along, made me growl and laugh (bitterly) and cry. Lemaitre really is a master storyteller.

MacLehose Press has already published two of Lemaitre’s crime novels (see my reviews here and here) and hopes to bring out a translation of this book too soon. I also had the pleasure of interviewing the author and was entranced with his answers.