It’s not just the British gardens that are beautiful, of course. Here are some more hidden gardens all over the world, where you can forget about the hustle and bustle of daily life.

Last week, when we were covered in snow, I needed to escape to warmer climes, but the truth is I love nothing more than spectacular, remote mountain retreats… in countries which know how to cope with snow and access and heating!

In a recent report the British Council warned that a post-Brexit Britain will need more rather than fewer language skills. ‘Language skills must be a priority’ – the headline trumpets. Yes, must, but it won’t (thanks to Sunny Singh for the Tweet which inspired this!). I’ve seen this time and again – and there are many reasons for the lack of interest in other languages.

So is there one thing that might tempt Brits to learn another language? Well, my older son has a theory about why English footballers fail to live up to their youthful promise. They don’t get much chance to play in the Premier League as they become adults, because of all the foreign players who do speak some English and are willing to relocate. And the English players are reluctant to move abroad and gain experience in other leagues, because they lack the language skills.

Of course, not all of us had the opportunity to learn languages at school (and the way they are taught and the lack of teachers or high standards is another matter). But we can at least remain curious and open towards other cultures, read as much as we can in translation, ask questions, familiarise ourselves with world history and geography… But no, I was shocked to see that children from the age of 13 can opt out of history, geography and any languages other than English for their GCSE. They can study PE, food tech, photography and business studies instead – all very nice in themselves, but lacking the international perspective (at least in what they cover). No wonder we have insular Britain!

Finally, the secret spy part of me would like to know what other colleagues are whispering about me and the organisation in the corridors. The number of times I’ve heard German, French, Japanese, Romanian colleagues grumble about things in their own language sotto voce… and their American masters are none the wiser.

I suppose the only solution is for the Brits to retaliate with their ‘hmmm, such an interesting concept’ = ‘that’s a load of bollocks’.

violent real estate in Big Apples the world over

Afghan by night he wanders

from one gentrified neighbourhood to slums

crime with a view

he talks about eternal objects of desire

he steals, scrounges, prostitutes self and others

to be talked about

It’s the hommes who are fatales.

He cannot move beyond his appointed place

respect the rules of the universe you are in

don’t test the elasticity of frontiers

this is his kryptonite

or your turn of the dime

when we lunge at monsters we will find

not many imaginary ones among them.

our lives all repetition

transcription of past conversations

what a piddling bore

The 30th Salon du Livre in Geneva took place from the 27th of April to the 1st of May. Although one of the biggest Swiss press groups Ringier and the Swiss broadcasting corporation have pulled out of the Salon du Livre in Geneva this year, claiming that it’s too expensive to rent a stand and that the impact upon audience or reader figures is negligible, roughly 100 000 visitors beg to disagree with that. 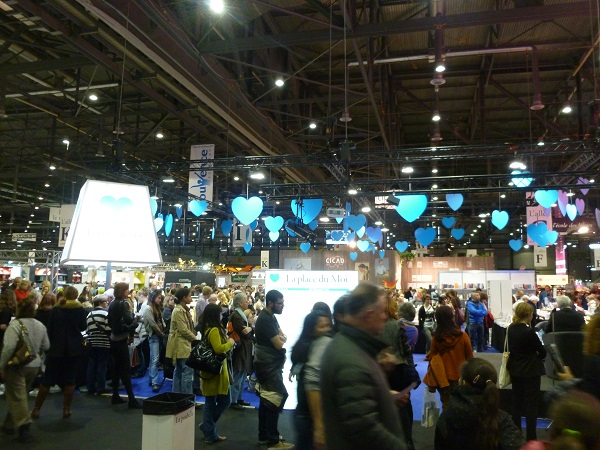 The Salon has lost the ‘international’ in its title, but still brings a fair number of authors from all around the world. This year the country focus was Tunisia, but there were plenty of other non-Swiss, non-French language events. For instance, there was a special Paulo Coelho exhibition and talk given by the famously reclusive Brazilian author. There is an African ‘salon’ and an Arabic ‘pavilion’, a large English language bookseller, plus all sorts of cultural associations within Switzerland (Armenian, Serb, Spanish, Chinese) – and of course the Geneva Writers’ Group was there too, for all those reading and writing in English.

It is not a trade fair, but much more a ‘get to love books’ event, targeted at families and schools and the general reading public.

I didn’t see as many big names this year (or at least not ones I was interested in), but I did get to hear the wonderfully articulate and enthusiastic Dany Laferrière, first black author in the French Academy. He also signed a book for me (and drew a flower, bless him!)

There were a number of famous BD illustrators present, including a special exhibition dedicated to the Swiss claim to fame: the unruly teenager Titeuf.

It was not all about books. There were a lot of musical and comedy events, particularly in the Le Cercle tented area, which had the atmosphere of a jazz club. Well, a well-lit, immaculate jazz club of the Swiss persuasion…

The emphasis is most firmly on interactivity. The Factory this year was designed like a house, with each room in a different colour and theme, where you could share your selfies, your worst nightmare, your superpower, your great secret etc. 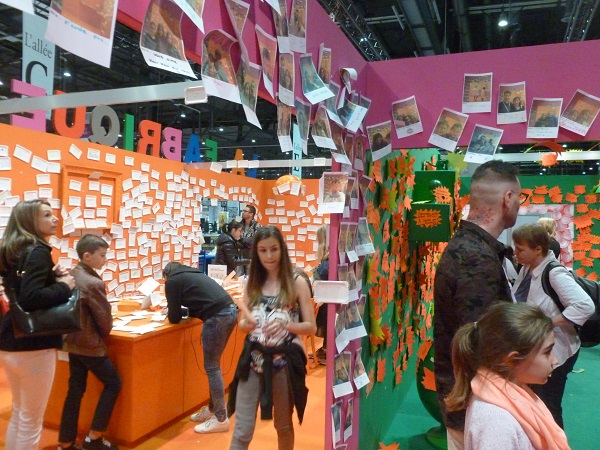 Of course, there were plenty of places to eat and rest, and the beloved Swiss cow had to be present somewhere as well. 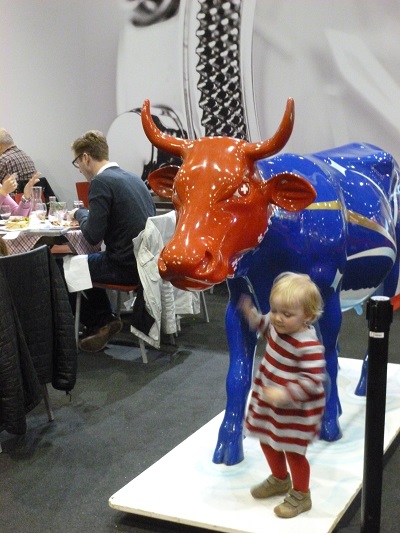 I didn’t manage to attend any conferences in full, but I did catch the odd 5 minutes here and there. And I got a hug from Alain Mabanckou, who was looking very dapper in a bright blue suit and a hat. 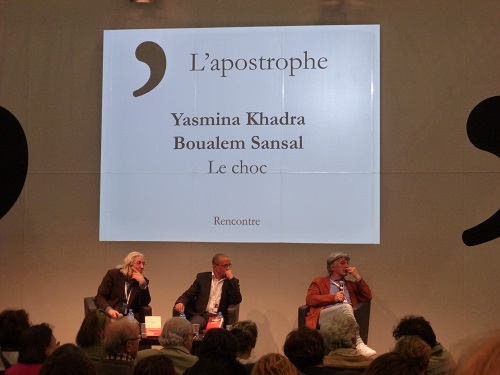 There were fewer craft sections than last year, but there were some beautiful decorations and art objects everywhere. How could I resist these Niki de Saint Phalle women dancers? 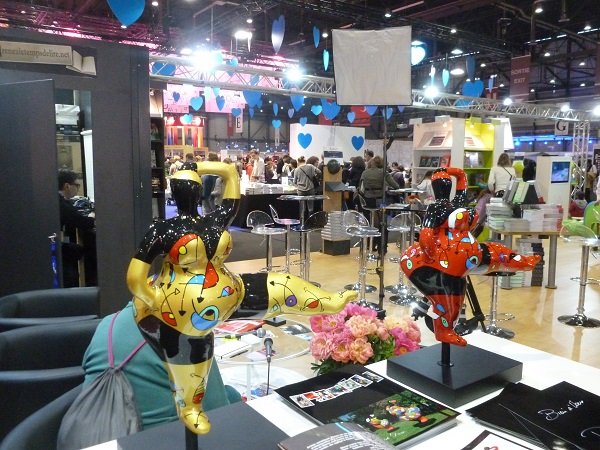 On Thursday this week I had the pleasure of attending the Geneva Book Fair. This is a large annual event (by Swiss standards), but it attracts little attention internationally because it is geared towards French speakers (lots of foreign books, but they are all translated into French; I couldn’t find even Swiss German writers in the original) and has few big name invitations. Although I did get to see Linwood Barclay there last year.

It is not a trade fair and many of the standholders and publishers say they don’t even sell that many books. (Hmmm, book prices in Switzerland may have a little to do with that – 25-30 CHF for a paperback is very common, about £20 or $30). Instead, it’s very much about raising awareness, the general public and education. Small wonder it was teeming with schools, children running around doing treasure hunts or learning how to draw BD characters, or toddlers reading with their parents. 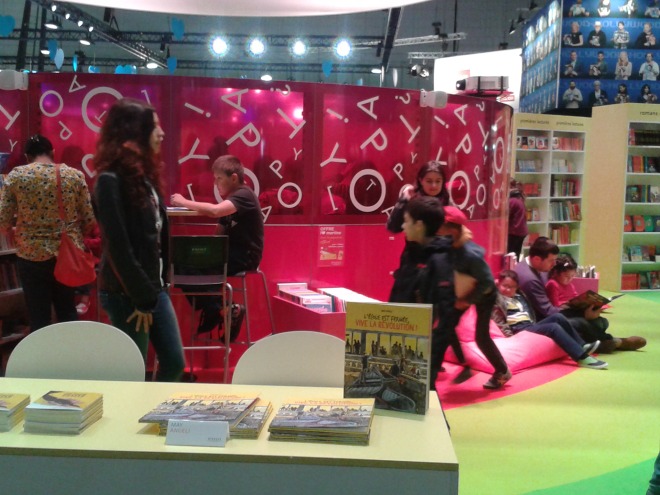 And it’s not just about books – there were many stands dedicated to associations (book clubs and writing groups), universities, arts and crafts, health and well-being, cookery workshops and wine-tasting. There are plenty of outlets for your own creativity.

I minded the Geneva Writers Group stand for a few hours. We improvised a bit with the decorations, but next year we will create something truly magical! I had no books to display myself, of course (maybe next year or the year after?), but I was surrounded by talented members of the group who did: Katie Hayoz (I’ve reviewed one of her YA books here), science-fiction writer Massimo Marino and YA/NA author Olivia Wildenstein. And I’m not just saying that because they are nice people… 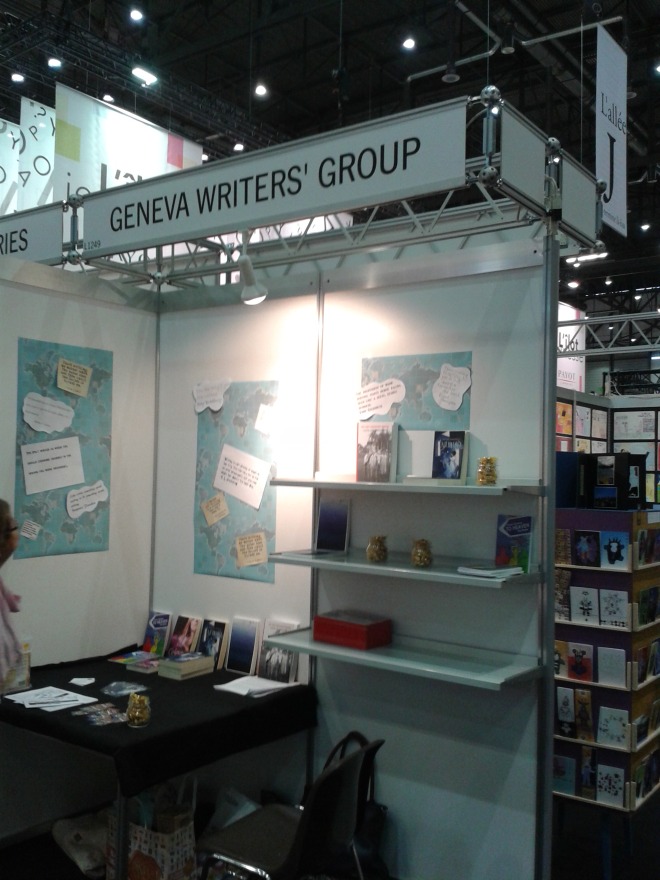 In the afternoon I wandered around, bumping into Max Cabanes again and telling him I should pay him royalties for using his drawing as my avatar. The BD illustrators are a wonderful bunch, and I also enjoyed talking to storywriter De Groot (creator of Leonard, about a mad inventor, one of my boys’ favourites) and Batem (illustrator of the magical Marsupilami).

When I said it was aimed towards French speakers, I did not mean to imply it is not international. On the contrary, there are many special interest country and regional sections, ranging from the youngest canton of Switzerland (Jura) to Arabic nations of North Africa, Brazil to Armenia. Each one organises panel discussions or author interviews on small stages. But there are so many events competing for your attention that not all get the audience they deserve. I got to see Dominique Sylvain making some very witty and wise observations about writing crime fiction in front of just 5-6 people: in Lyon, she’d have been mobbed!

I was restrained in my book purchases, because most of the French authors I wanted I can get cheaper across the border in France. I did find a book by Alex Capus in German Mein Nachbar Urs (My Neighbour Urs) – which I couldn’t resist, since I have a very good friend with that name. Besides, I’ve been meaning to read Capus for ages. There was also an English-language bookshop that was selling off their remaindered books at very low prices, so I bought a one-volume selection of prose by Seamus Heaney, published by Faber & Faber, and the deliciously gossipy looking Writers Between the Covers. The Scandalous Romantic Lives of Legendary Literary Casanovas, Coquettes and Cads by McKenna Schmidt and Rendon.

Apologies for the shaky photographs: I hate taking pictures with my mobile phone!

A bookshop in Venice is of course prone to flooding, so what better way to store books than in a gondola? For more pictures and a review of this bookshop go here.

This bookshop has opened since my last visit to Bucharest, so I haven’t seen it yet, but it looks gorgeous in its old villa setting at Piata Romană No. 5. Another firm favourite is Librăria Cărtureşti on Verona Street, but I couldn’t find any pictures to do it justice.

This is a floating bookshop, operated out of a narrowboat moored in Burton-on-Trent, UK, but chugging up and down most waterways in England and Wales.

If I had nine lives, I would spend all of them wandering up and down the Kanda district of Tokyo, where bookshops with both new and second-hand books abound.

A ten-year love story, as you can read on their website. In the spring of 2002, Oliver and Craig spent a week on the island of Santorini. The land inspired them and there was no bookshop, so they drank some wine and decided to open one.

And here is a bookshop that I do know from my student days. Situated just opposite the main entrance to the British Museum on Great Russell Street in London, it is over 110 years old and specialises in Oriental books: art and literature, music and film, plus out of print or rare books.

Finally, here are three modern interpretations of a bookshop, with a very designerish feel to them. Perhaps not as cosy and haphazard as the ones above, but certainly a pleasure to look at.

I want to be a child again and live in this bookshop/library.

Swedish designers Smånsk have created this bookshop for travel magazine Vagabond in Stockholm – a world away from Ikea. Or not?