Hosted by Kate at Books Are My Favourite and Best, this is your chance to make free associations (or weird and wonderful ones) between books: we all start in the same place but usually end miles/continents apart. This month we start with Trust by Hernan Diaz.

I haven’t read it but it features wealthy families in the 1920s, which instantly makes me think of The Great Gatsby by F. Scott Fitzgerald. One of my favourite books, as my older son never ceases to remind me – luckily, he thought it was pretty good too, even though he did not do English Literature for his A Levels (or maybe because of that).

Next link is a book (ok, a play) that I did study for my university entrance exam and therefore did not like as much as I might have done otherwise: Death of a Salesman by Arthur Miller. I suppose in Communist times it was regarded as an indictment of the American Dream and therefore Capitalism – and so it should be! Incidentally, this is a further link with The Great Gatsby, since that book also shows the feet of clay of the American Dream.

Willy Loman is the disappointed salesman in Miller’s play, so my next jump is to another character called Willy, namely Willy Wonka from Charlie and the Chocolate Factory by Roald Dahl. I loved this story as a child, and my children enjoyed it too, although it turns out that the author was not that nice as a person. I think we can catch glimpses of that in his work too – but then, children are often not very nice either, so they chortle at naughtiness and evil deeds in their fiction.

Chocolate forms my next link to Chocolat by Joanne Harris. I saw the film quite a while back but never read the book until a few years ago and… no, it’s not my kind of book, but I do like its description of small-minded, small-town France (although it could describe small-town mentalities anywhere, but just with better food and weather).

It is tempting to use France as the lynchpin for my next book, especially since I am doing a #FrenchFebruary reading challenge, but instead I will turn to a writer from neighbouring Switzerland who is a master at describing the rural villages of the Vaud canton on Lake Geneva: C.F Ramuz: Beauty on Earth, which I have read and reviewed a while ago (and, which appropriately enough was translated into English by the very friend in whose house I was staying last week).

A tenuous final link: for the longest time, I got Ramuz confused with Frédéric Mistral, born and built in Provence, who wrote in Occitan and was awarded the Nobel Prize for Literature in 1905. [Ramuz partly overlapped with Mistral but wrote in French/Suisse romande and did not win the Nobel Prize. As you can see from their portrait photos below, they don’t look that alike either, although they both seem to appreciate a hat.] Mireille/ Mireio is considered Mistral’s most important work, a long narrative poem, a sort of Romeo and Juliet for the region. I don’t know how many people still read him today, outside his native region?

So my literary travels have taken me from America to England, from France to Switzerland and back again. Can’t wait to see where the others went with their literary links!

6 Degrees of Separation is a meme hosted by Kate over at Books Are My Favourite and Best. You start with a different book each month and link it to six others to form a chain, the more imaginative the link, the better. I hesitated a little about participating in it this month, because I had not read the first book (it’s not available yet in the UK) and because it doesn’t sound like my kind of thing.

Phosphorescence by Julia Baird has a beautiful cover and the subtitle ‘On awe, wonder and things that sustain you’, which sounds a little too American self-helpy for my taste. But Kate herself rates this book highly, as being comforting and illuminating, as well as well-written, so never say never about reading this.

Another book that I was convinced I wouldn’t like and yet it pleasantly surprised me was Rules for Perfect Murders by Peter Swanson. I have to admit that I reviewed Peter Swanson’s first crime novel back in the days when I was reviewing for Crime Fiction Lover and was not entirely convinced. I said there was ‘a breathless cinematic quality to it: an exciting thriller’ but ‘a little déjà vu’. So I (perhaps somewhat unfairly) never requested another of his books since. However, I came across this book at the library and, with lockdown looming, I thought I’d give it a go. I don’t think Swanson will ever be one of my favourite authors, but it was a fun read, with all of the allusions to other famous crime writers and their most famous books.

Bit of an obvious next link, the Swanson that instantly comes to mind is the inimitable Gloria Swanson, screen siren and muse, but also a woman who did not suffer fools gladly. I haven’t read this book Swanson on Swanson, but it looks very intriguing and candid, and apparently does not sugarcoat the Hollywood studio industry at all.

I’ve chosen another unusual, fragmented autobiography for my next link, namely Jean Rhys’ Smile Please – a collection of vignettes about her childhood in Dominica, her youth in theatre in London and Paris. This is the material she so successfully mined in her novels and stories, but it’s always worth bearing in mind that fiction and biography may not be quite as closely linked even in her case, and that she said: ‘A novel has to have shape, and life doesn’t have any.’

Tenuous link next, with a male author whose name is also Jean – namely French regional author Jean Giono. Regional not in any disparaging sense of the term, but because he is most associated with the Provence region in which he lived. He was much admired by Marcel Pagnol, who also wrote novels set in that beautiful area of France. He is best known for his historical novel Le hussard sur le toit (The Horseman on the Roof), which people outside France might know from the film adaptation starring Olivier Martinez and Juliette Binoche, and which seems very topical now, as it deals with a cholera outbreak in the 1830s.

Juliette Binoche is the link to the next book, Chocolat by Joanne Harris, which became a worldwide bestseller following the film adaptation with her in the starring role. It is also set in a French village (like Jean Giono’s book) and slightly historical, although the past there is far more recent, set as it is in the more traditional 1950s/60s.

For the final book in the chain, I’ve chosen another novel which was published in 1999, the same year as Chocolat and which is also set in a small village, but this time Holt, a fictional town in the American prairies. Kent Haruf’s Plainsong is a book which had been recommended to me by many fellow book bloggers, and they were absolutely right. I certainly enjoyed the pared down, detached style and close observation of a small group of characters.

Once again I’ve travelled far on my monthly Six Degrees journey: from Australia to LA to Dominica to France and Colorado. Where will your associations and links take you?

Six Degrees of Separation is a monthly link-up hosted by Kate at Books Are My Favourite and Best. Each month, a book is chosen as a starting point and linked to six other books to form a chain. A book doesn’t need to be connected to all the other books on the list, only to the one next to it in the chain.

The starting point for May is The Slap by Christos Tsiolkas. A controversial and marmite book when it first appeared in 2008, it certainly established Tsiolkas’ reputation as a frank and uncompromising critic of Australian society beneath the easy-going, laid-back surface.

I haven’t read The Slap, but I was utterly charmed by Christos when I met him at the Livres sur le quai festival in Morges in 2015. I have read other novels by him and I am linking up to Barracuda, the story of a working-class lad trying to escape his upbringing through his talents as a swimmer. Shockingly frank and unsentimental look at Australia’s so-called ‘classless’ society.

Another book which explores notions of class and takes place in a school (as large chunks of Barracuda does) is Different Class by Joanne Harris. Set in St Oswald’s Grammar School for Boys, it returns to the fate of eccentric Latin master Roy Straitley who was persuaded to delay his retirement for a year – but begins to regret his decision with the appointment of a fashionable new Head, who was one of his nightmareish former pupils.

Joanne Harris is of course most famous for her book Chocolat, and another book with a strong link to chocolate is Like Water for Chocolate by Laura Esquivel, which is a love story underlining the strong sensuous link between cooking and lust (or perhaps cooking as a sublimation of passion), and the prevalence of chocolate in Mexican cuisine.

Another Mexican writer I have discovered more recently is Valeria Luiselli. Her Faces in the Crowd is the story of an obsession, as the narrator, a somewhat harassed mother and writer in Mexico City, tries to remember her life in New York and her growing fascination with the life and poetry of Gilberto Owen (who was a real historical figure).

The title of the book above refers to an Ezra Pound poem, so my next link is to his volume of Cantos, which influenced me profoundly in my love for poetry and for exploring other cultures, despite what I later came to find out about his anti-semitism and collaboration with the Fascists.

Perhaps another reason why I liked Pound when I was younger was for his stylish and unconventional translations of Chinese poetry, so my last link is to one of the Chinese classics which we all had to read when I studied Japanese at university, Dream of the Red Chamber, written in the mid 18th century during the Qing dynasty. The opening poem of this epic family saga says all there is to say about the fine line between fiction and reality: 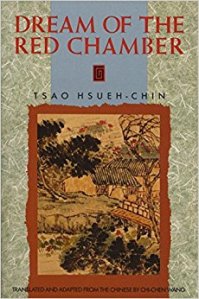 So that was a whirlwind world tour – from Australia to the United Kingdom to Mexico to New York City to China. Where do your literary connections take you?