By fortunate coincidence, it turns out today is this author’s birthday, so Happy Birthday, Mieko! And thank you for a very thought-provoking and entertaining read.

If I told you that a book entitled Breasts and Eggs talks frankly and at length about breast surgery, sperm banks, artificial insemination, asexuality, single motherhood and periods, you would probably conclude that it is an angry feminist tract – possibly written by a brash Western writer (Virginie Despentes or Otessa Moshfegh come to mind). The fact that it was written by a Japanese woman makes this book seem even more revolutionary. Japan is still a far from equal society when it comes to gender – in some ways, it has even regressed in recent years under a conservative government.

Yet, of course, Japanese women have been writing books portraying women’s (and men’s) thoughts and their restricted lives for centuries.  Just off the top of my head: Murasaki Shikibu‘s portrayal of men playing their power games with women as their pawns in the Heian period, to the frank description of sexual desire in Akiko Yosano, the trauma of spouses supplanted by second wives in Fumiko Enchi,  the description of working class struggles and the red light district in Ichiyo Higuchi (a writer Kawakami cites as an inspiration), the fiendishly subversive retelling of myths of Aoko Matsuda. There is a plethora of exciting women writers in Japan today and, luckily for us, more of them are getting translated. Alongside the well established names such as Banana Yoshimoto, Natsuo Kirino,  Yoko Ogawa, Hiromi Kawakami and Kanae Minato, we are starting to see the emergence of challenging and fearless writing, occasionally with a surreal twist, by younger authors such as Hitomi Kanehara, Sayaka Murata, Misumi Kubo and Nao-Cola Yamazaki.

So, while I don’t agree that Mieko Kawakami is a revolutionary who ‘lobbed a literary grenade into the fusty, male-dominated world of Japanese fiction’ (as The Economist puts it), I have to admit that this book addresses issues that are typically swept under the carpet in Japan – and, let’s admit it, probably are not discussed that much in fiction in the West either. And she manages to offer us a variety of opinions about motherhood and the female body, while also giving us an involving plot about sisterhood and friendship, well-rounded characters with great back stories, and writing which can span everything from raucous female banter (in dialect) to philosophy to passages of lyrical descriptions.

In the first part of the book, which is by and large the original novella entitled Breasts and Eggs that won the Akutagawa Prize in 2008, we see three women at three different stages of their lives. Natsuko, the narrator, is 30, still young but no spring chicken anymore, and she can feel the clock ticking on her career as a writer in Tokyo. Her sister, Makiko, is nearly ten years older and still lives in their home town of Osaka, doing her best to keep herself and her daughter afloat as a single mum, working in a hostess bar. She too can feel the clock ticking – on her body – and thinks that getting breast enhancement will improve her life and her career. Meanwhile, her daughter Midoriko (the name means ‘green’ in Japanese and she really is very green still, just starting to experience her own bodily changes at the age of twelve) refuses to communicate with her mother in any other way than in writing. Natsuko is mostly the observer and tries to mediate between them, but she struggles to understand her sister’s need for validation or her niece’s judgemental attitude. There are some beautiful conversations between them, but the reminiscing about the past steers clear of either melodrama or sentimentality. One of the most poignant passages was the conversation between aunt and niece as they go round in a ferris wheel – this was the passage that Kawakami read out during her Edinburgh Book Festival interview, and the contrast between the Osakaben that Natsuko speaks with Midoriko and the descriptive passages in literary Japanese stood out even more when she read them. 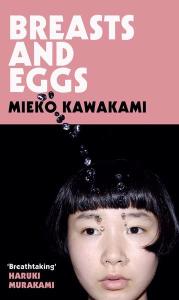 I would have loved to see more of the sister and niece in the second part of the novel, but that is really Natsuko’s story (the title of the whole book in Japanese is Natsu Monogatari, which can be translated as either Summer Tales or Tales of Natsu). Natsuko is now nearing the age of her sister in the first part, and this time it’s her biological clock that is ticking. She is still single, and doesn’t really want a relationship with a man. She is enjoying some literary success, which is a great opportunity for mocking the pretentiousness of the Japanese literary scene, but realises that she really would like to have a child before it gets too late. So she starts investigating the possibility of using a sperm donor (which is not really possible for single women or same-sex couples in Japan). Along the way, she both befriends and alienates people, and gets to hear a variety of different attitudes about what it means to be an artist or a mother or both in Japan, as well as being the child of a sperm donor (and condemned to never know exactly who your biological father is).

As for being a wife, well, I can just imagine the reaction of the reading public to the quote below by a fellow writer Rika, who is also a single mum, and whom Natsuko befriends:

Everything men do repulses me, I can’t tell you how good it felt when we got divorced and my ex left the house. It was like I could breathe again… It’s just, men can be such idiots. They can’t do anything around the house without making a ton of noise, not even close the fridge or turn the lights on. They can’t take care of anyone else. They can’t even take care of themselves/. They won’t do anything for their kids or their families if it means sacrificing their own comfort, but they go out in the world and act all big, like I’m such a agood dad, such a provider… For better or worse, living with someone is nothing but friction, the collision of incompatible ideals. It takes trust to make it viable. I mean, love is basically a drug, right? Without love and trust, resentment is the only thing that’s left.

Well, I could certainly relate to that, and so could many women, particularly those living in rather patriarchal societies. Yet, in her Edinburgh Book Festival interview, Kawakami expressed some surprise and amusement that her book was a big hit with male readers as well in Japan.

In some ways, this novel reminded me of Americanah by Chimamanda Ngozi Adichie, both of them novels of ideas, with the focus here being on women’s bodies and motherhood instead of race and immigration. Much as I loved Americanah, I felt that Kawakami was more successful at integrating her ideas into the flow of the narrative, rather than having long blog-like passages, which slightly marred Adichie’s book for me. However, another reviwer I admire feels that there is a blog-like quality to the second half of the book and overall it’s chick lit with a feminist agenda. I think individual passages taken out of context can sound flat, but when all the layers come together, it certainly left me with a powerful impression.

Thank you also to Tony Malone, who in his review of Breasts and Eggs, pointed out that there was an alternative translation of part of the first part by Louise Heal Kawai, using a Mancunian speech pattern to render the Osaka dialect. I think it’s a brilliant version and wish we could have had the whole book translated like that (although Sam Bett and David Boyd have done a good job of smoothing out the language to appeal to a wider audience). And, although I’m the last person to suggest that books by women writers should only be translated by women, given the particular subject matter, I cannot help wondering how different it might have looked if it had been translated by a woman.