I had ordered some books a while ago, from many different sources (mostly from the US) and for two weeks the postman brought me nothing but bills and renewal notices. I began to think that he was avoiding the regular heavy book parcels. Yesterday four packages arrived all at once, so I take it all back and am full of admiration once more for my postie’s muscles and patience!

So here are my latest delights:

Other than Robert Redford in The Great Gatsby and Peter O’Toole in Lawrence of Arabia, I am not a great admirer of blonde male actors. But Sam Shepard was an exception. He was not only the epitome of cool yet tormented, but the fact that he could also write – and write so well – was a major attraction. I loved his plays back in the days when we were doing amateur drama, especially Fool for Love, but I never owned any of his books nor read any of his prose. So, saddened as I was when I heard about his death, I felt I owed it to him to buy Fifteen One-Act Plays and (recommended by Stav Sherez, who is so much more knowledgeable about American literature than me and called it one of the best books of recent times) Cruising Paradise, a collection of short stories, dialogues, diary extracts to portray remote or small-town America.

To celebrate the 4th of July, American publisher Open Letter Books (a nonprofit, literary translation press established at the University of Rochester) has a 40% off sale, so I went on their site intending to buy just one book but came away with three.

I mean to read this Brazilian novel, translated by the ever-wonderful Margaret Jull Costa, as soon as it was shortlisted for the Best Translated Book Award, but I ordered from a German site and it never materialised. In the meantime, it has won that award, so this was my second attempt to get my hands on a copy, this time directly from the publisher. It’s a novel from the 1950s, set in the Minas Gerais region of Brazil (a former agricultural and mining heartland), and it describes the decay and fall of a patriarchal family. But it’s not your average historical family saga – it represents a move towards the modernism of Clarice Lispector, who was a close friend.

One of the greatest Croatian and European writers of the past two decades, I love her more for her essays than her fiction. This is a collection of what one might call travel essays, but in her hands it becomes a meditation on the past, present and future of Europe, equally wise and well-informed, bitter and funny, whether she looks at history, politics or popular culture.

I couldn’t resist this contender for Latvia for my #EU27Project. This is apparently the story of a love triangle with political and historical dimensions, and Abele is one of the most notable young writers in Latvia, with a combination of lush descriptions, directness, evocative language and precision in mining psychological insights.

A best-selling Israeli novel set in a Tel Aviv apartment building, this novel examines a society in crisis, social and political ills, through the lives and problematic decisions of three of its residents. I will be reviewing this for Necessary Fiction, which has been such an inspirational website, introducing me to so much less highly publicised writing from independent publishers, both in English and in translation. This book will be coming out from Other Press in the US in October 2017.

This is the book I ordered from Amazon and it was, quite honestly, a mistake. I had read a review of it on the Puzzle Doctor’s blog and was planning to get it on Kindle, but I pressed the wrong button. Never mind, it wasn’t too expensive, and I prefer reading in paperback anyway. Originally published in 1931, now reissued by Arcturus Crime Classics. This is the one that arrived within a couple of days rather than a month.

My keen fingers may have slipped a little and ordered a few more books which should be arriving within the next two weeks – Brazilian, German, Austrian, Japanese and American authors will be joining me presently. 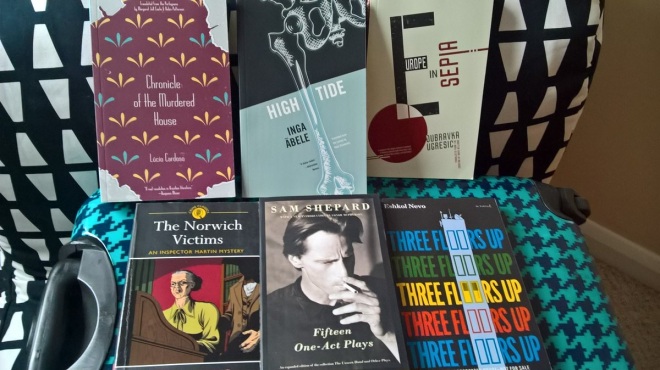