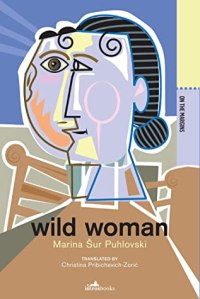 This Croatian novel published by Istros Books was a recent discovery thanks to the Borderless Book Club organised by Peirene Books. The author is an example of persistence – although she started writing at an early age, she only got published in 1991 after writing no less than nine books. But of course, we all know what happened in Yugoslavia after 1991 – so she ended up at the age of 50 having written all her life, but with very little to show for it. Luckily, her 20th novel, Wild Woman, had some success in Croatia, and has now been translated into English. And the good news is that Wild Woman is just one book in a series depicting the life of a young woman trying to make her way in her society (and in a rapidly disintegrating country).

In fact, there are five books in total depicting Sofija – a fictionalised version of the author herself – and this has prompted comparisons with Knausgaard. It’s a coming of age novel or a ‘waking up to reality’ which will sound familiar to many women, especially those who grew up in patriarchal societies or who had artistic aspirations. The protagonist looks back on her student years, the death of her drunk and frequently violent father, the hard-working and downtrodden mother, her infatuation and marriage with a lazy, pretentious womaniser.

What was interesting when we discussed the book at the Book Club was that people unfamiliar with socialist societies were wondering why the young couple were still living with their parents, but could afford to eat out and go on holiday to the seaside. I had to explain that there was frequently a housing shortage, you were placed in a queue to get affordable accommation, but that food was cheap and domestic holidays were heavily subsidised for students or by the trade unions. There is also that fraught moment, when the husband turns out to have a brain tumour, that they borrow and beg money to bribe the doctors for an operation… and when the doctor refuses to accept their money, they rejoice that they have some money left for going on holiday to the seaside.

The almost casual mention of domestic violence, how it was almost an expected part of being a woman in that society at that time, as well as how Sofija is constantly urged to ‘stand by her man’ because he has fallen ill, how she supports him pysically, financially, morally, while he has a licence to misbehave, all of this rang very familiar. Socialist society meant women were expected to go out and work as hard as men, but did not necessarily lead to any liberation on the home front. Although atheism was espoused during Communist times, the preceding centuries of Catholicism and Orthodoxism traditions of relegating women to submissive roles did not die instantly (if at all).

The narrator is remarkably frank about the disintegration of the marriage and the hypocrisy of those surrounding them. The voice is raw, angry, naive and cynical by turns, slightly self-pitying – very authentic indeed. This is what she says about her in-laws:

My poor son, Danica moans, crying her eyes out, while France just nods inconsolably, shakes his head and brings her coat so that they can return to the peace and quiet of their own home, or at least the peace and quiet of a place where they don’t have to look at a sick person all day. They don’t have to wait for the next seizure, to jump every time there’s an unexpected sound in the flat, the sudden flushing of the bathroom toilet, the door slammed shut by the wind… they don’t have to tremble if he calls out from his room to the kitchen – not knowing if he needs something or is screaming – and then run over to him, prepared for the worst. Make sure he takes his pills, and if you discover in the middle of the night that he’s run out, go straight to the duty pharmacy, wherever it is, on foot if need be, and get a hold of those pills, even if you have to do it without a prescription.

The description of the yawning gap in their marriage is conveyed in just one long breathless sentence, the perfect furious stream of consciousness:

The sea will restore him, I think, but it doesn’t, it doesn’t, he lives with me but is lifeless, like a doll you have to wind up, I make him move, he eats, he walks, he swims, he doesn’t sunbbathe because it’s bad for the angioma, and anyway he has a fair complexion, he doesn’t like the sun, but he drinks, the red wine has been on the table since lunch, he sits, smokes and sips his wine, gazing out at the sea from the shade, and I’m next to him reading, because what else is there when all the joy has gone.

The story is perhaps an all too well-trodden one, but it’s told in a fresh voice, not politely restrained like so much Anglo-Saxon literature is, and from a part of the world where we expect political rather than domestic drama, so I am all for it!