To say that this is one of my favourite books is an understatement. It’s amongst my top ten (and I am very, very picky). Nine years in the making, revised endless times, Fitzgerald himself considered it his best work. First, here are some covers of ‘Tender Is the Night’ which I have admired over the years. 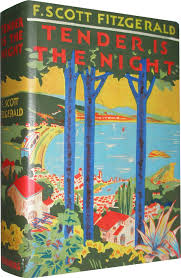 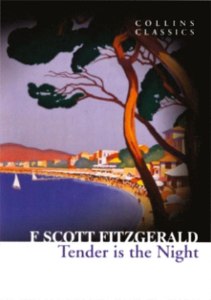 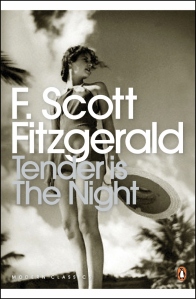 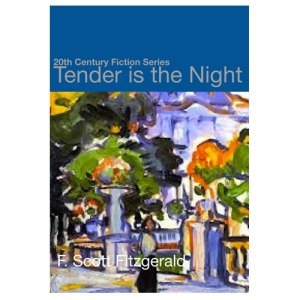 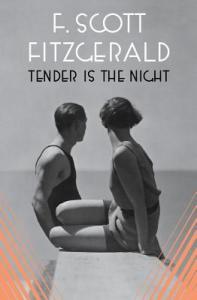 My own battered copy dating from 1983 (goodness, so I must have read it for the first time when I was quite a bit younger than Rosemary, no wonder I found it so shocking!) has a less immediately appealing cover. 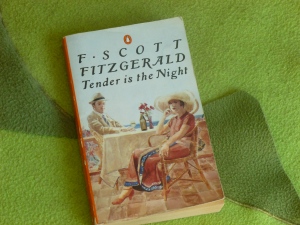 It has been with me for thirty-two years now, across nine moves to a different country, fourteen house moves, my own first marriage break down, through my own darkest days of depression, through my greatest personal triumphs and it has witnessed two children growing up to be nearly the age I was when I first laid eyes on it.

But I had not reread it cover to cover in oh-so-many years now. Would it disappoint? Not exactly, but nor did it delight me quite so much as before. One critic commented that anyone who loved Gatsby would end up loving this novel even more. In my case, I’ve moved the other way. I used to prefer it to The Great Gatsby, but I am no longer sure that is the case. Gatsby is concise and leaves a lot to the imagination. We never quite find out enough about Jay Gatsby’s missing years, unsavoury connections, or the way he made his wealth. It is the subject of myth and speculation. In Tender Is the Night everyone’s back story is much more clearly spelled out (although here too, there is plenty of gossip) and the points of view shift. The style feels much less in control, even repetitive at times. Some of the characters feel a bit extraneous, although each one contributes to the atmosphere around the gilded couple.

I remembered very clearly the French Riviera and Paris locations, but had forgotten about Lausanne and Vevey, so it was rather charming to read about the locations that are now so close to me. Some of the scenes that I remembered very clearly were still there, glittering like gems of absurdity and yet extremely poignant: the anecdote about trying to cut a waiter with a musical saw, the ridiculous duel which neither participant really wants, what Mrs. McKisko witnesses in the bathroom…

But the downward spiral of the marriage and the descent into alcoholism felt much more restrained this time round, not as shocking as I remembered – perhaps because I’ve read so much about dysfunctional families and breakdowns since. Now that I’m so much older, I had more sympathy with Nicole rather than with Rosemary. In fact, Rosemary seemed to me already tainted with the allure of fame and the artificiality of the film world. Yet I still understood her youthful hero-worship of Dick Diver, and her ultimate disappointment.

Finally, what struck me is how F. Scott Fitzgerald is so aware of the deadly consequences of privilege, how he mocks both those born with money and those chasing after it (or fame), how relentlessly self-aware he is in his work… and yet in his real life he could never escape the siren call of this very world he professes to despise. Tender Is the Night recognises that man is weak, filled with self-doubt, but that he is at his best when he still seeks out perfection. Doomed to failure of course, as we finally admit that there is no perfect moment, all is transient, but oh, how we hate ourselves for giving up…

Finally, what about the chronology? There are two versions of this novel. The best-known (the one first published in 1934) starts on the Riviera and then deals with the back story of Nicole and Dick’s meeting and marriage in flashback. The second version, published posthumously, follows the events in chronological order. The original version is best, even for people like me who don’t overly like complicated flashbacks. In this case, it’s not: Fitzgerald knew what he was doing. That chapter (X in Book II) from Nicole’s point of view, taking us right back to the present – priceless!