Or ‘Autumn’, for those of us who are still resisting the encroachment of Americanisms into our daily speech. With photography by Olaya Barr, visual arts, drama, non-fiction, poetry, fiction and reviews, there is something for everyone here.

So many goodies to explore! As usual, the sheer ambition and mix of languages is dazzling. 31 countries featured in this issue alone. Togo is represented here for the first time, bringing the total of countries in the archives up to 122.  The number of languages featured is now at 102, with the inclusion of Q’anjob’al from Guatemala.

Just a few of the things I want to read at leisure during my holidays, if I have internet connection:

The contrast between intriguing possibility and depressing probability is perhaps widest of all with Xiao Hong, who, in her brief thirty-one years on this planet, managed to write some of the finest Chinese fiction of the twentieth century. I wonder what would have happened to her had she lived another few decades, but I doubt it would have been anything good.

Maggie Nelson’s Bluets, which I recently read for the first time and am already rereading, puzzled me. It’s a memoir mourning the death of a relationship. It’s also a series of numbered mini-essays, meditations and aphorisms linked to the colour blue, in its literal and metaphorical manifestation. At times, it reaches poetic intensity, but this is not what we would usually describe as poetry. (Foyles had it displayed in the poetry section, however.) It is the prose-poem mix and research-intensive, allusive type of poetry which has become fashionable in recent years:  practised by Anne Carson, Claudia Rankine, Ariana Reines and Bhanu Kapil. (There are plenty of earlier examples of it, but it seems to be much more mainstream now.) 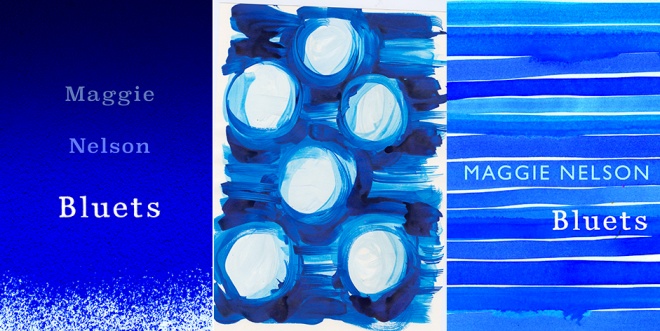 I like each of the above-mentioned poets and I liked this book too, if we think of it as poetry, as sudden illuminations of a dark area of the human heart and mind. Vignettes about loss and pain, where the anguished cry of hurt and anger is kept at bay through careful selection of information, data points, quotations. Mediated through this semblance of rationality, the unruly emotions can be filtered for public consumption, unlike the angry, self-pitying outpouring on a blog for instance (just talking about myself here). So a very useful device for passionate writers who want to avoid descending into self-pitying bathos .

135. Of course one can have ‘the blues’ and stay alive, at least for a time. ‘Productive,’ even (the perennial consolation!). See, for example, ‘Lady Sings the Blues’: ‘She’s got them bad/ She feels so sad/ Wants the world to know/ Just what her blues is all about.’ Nonetheless, as Billie Holiday knew, it remains the case that to see blue in deeper and deeper saturation is to eventually move towards darkness.

138. But perhaps there is no real mystery here at all. ‘Life is usually stronger than people’s love for it’ (Adam Phillips): this is what Holiday’s voice makes audible. To hear it is to understand why suicide is both so easy and so difficult: to commit it one has to stamp out this native triumphance, either by training oneself, over time, to dehabilitate or disbelieve it (drugs help here), or by force of ambush.

The author acknowledges this distancing effect. By writing things down, by finding words to share certain moments or feelings with others, she is robbing those moments or feelings of their mystical power. Which can be both good and bad. It might work as a way of overcoming sorrow and loss, but at other times it feels like you’re giving up something too precious:

193. I will admit, however… that writing does do something to one’s memory- that at times it can have the effect of an album of childhood photographs, in which each image replaces the memory it aimed to preserve. Perhaps this is why I am avoiding writing about too many blue things – I don’t want to displace my memories of them, nor embalm them, nor exalt them. In fact, I think I would like it best if my writing could empty me further of them, so that I might become a better vessel for new blue things.

However, there are two objections or hesitations that I have with this kind of writing. First, if it is poetry, it is too much ‘telling’ and not enough showing. I don’t think rationality and emotion have to be at odds with each other, but when I read or hear poetry I like to feel as if the poet is reaching directly inside my chest and pulling at my heart, or has seen directly into my head and made me aware of things that I’d previously hardly dared to voice. It’s very much like Emily Dickinson said: ‘If I feel physically as if the top of my head were taken off, I know that is poetry.’ There has to be something unspoken and ungraspable about it. It encompasses all of the poet’s feelings, plus mine, plus so much more.

Secondly, when this type of book is supposed to be a novel, such as Jenny Offill’s Dept. of Speculation, it feels to me like an incredibly lazy way of handling a story arc. Vignettes, no matter how well written, avoid the connective tissue and real plot development. Perhaps it’s a trick writers use to hide their lack of ideas for plotting. It’s as if I were writing the exciting scenes of a novel but leaving out all the links between them, anything which might explain character development (other than the narrator), or running away from the saggy middle because I can’t think how to improve it, or chickening out of a proper ending because I’m afraid I can’t handle it.

This is not the case with Maggie Nelson’s Bluets, but I now feel the urge to read her The Argonauts, which has a clearer narrative structure, to see how she handled that. While I agree that modern life is messy and oddly dislocated, it is:

a) Not a new thing: Modernist literature is entirely predicated on this loss of innocence and decline of society.

b) I don’t see why coherence has to be sacrificed to describe messiness in fiction. Perhaps in a time of confusion, we need the boon of structure more than ever, supporting us just enough so that we can play freely within it.

After an insane 2014, a stagnating cesspool of 2015 (I’m talking personal rather than global troubles here), I was looking forward to 2016. It was going to be a year of starting afresh, making changes, taking control. But 2016 has proved fierce, fearsome and unknowable so far. It has drained me more than it has energised.

In many ways, the greatest tragedy this year has been that it has robbed me of many of my illusions about and feelings for Britain. For me, it had always been a country that stood out as a beacon of civilisation and civility, fairness and even-handedness, where people talk to each other in moderate tones instead of breaking out into street fights. Over the past few weeks leading up to the referendum, I was beginning to recognise (from the media and the comments in the media) that Brexit had become a real possibility. It did not quite catch me by surprise, but it nevertheless hurt me. It’s not the vote in itself which makes me sad and scared, but the animal it has unleashed, how easily a country (and its people) can change beyond recognition. And yes, I know that there are still plenty of decent people there who are equally bewildered, shocked and hurt by what they see.

This reminds me of a divorce in far too many ways. Which is something else that 2016 is throwing my way, so bear with me as I work through this metaphor:

It seems difficult to believe in a period of meltdown, but the hatred won’t last forever in its volatile state as an unstable isotope. You have a choice. You can either allow it to harden into an ice-cold little kernel which will prevent you from ever trusting anyone again. Or you can let it decay, evaporate, blow away like fine dust… and build a more stable isotope to take its place.

Here is a song that has helped me through these last few days in particular, but also for most of the year.

Goodbye for today, from your Porsche with no brakes and, despite everything, no fear of speaking her mind…