I mistakenly thought the exhibition at the Barbican Modern Couples: Art, Intimacy and the Avant-Garde was on until the end of February, so I still had plenty of time to visit it. I’d been meaning to go since it opened in October, but something or other always seemed to intervene. So when I realised on Thursday that it was closing this weekend, I scrambled desperately to get tickets. Me and a few hundred other people, which meant that it was very crowded and quite a challenge to read the many texts telling you about the different couples of the exhibition.

The focus was firmly on the first half of the 20th century and the so-called avant-garde, including Surrealism, but the definition of art was very broad, including textiles, architecture, interior design, literature etc. Some of the couples I knew pretty well already: Pablo Picasso and Dora Maar, Rodin and Camille Claudel, Diego Rivera and Frida Kahlo, Vanessa Bell and Duncan Grant. Others, however, were more in the ‘heard about them vaguely’ category rather than knowing anything about their art, such as Jean Arp and Sophie Taeuber-Arp, Sonia and Robert Delaunay, Lee Miller and Man Ray. And then there were those who were completely new to me: Hannah Höch and Raoul Hausmann, Lili Elbe and Gerda Wegener, Unica Zürn and Hans Bellmer, Dorothea Tanning and Max Ernst. (I knew about Max Ernst and Leonora Carrington, but not about this later relationship.)

There were many positives about this exhibition: all kind of relationships were taken into account, from short-term love affairs to long marriages and more or less platonic relationships. Heterosexual couples, gay couples, a trans marriage, threesomes, fluid gender, interracial relationships – everything was present there. Many of the exhibits displayed that sense of exhilaration when true minds meet each other, when mutual support and collaboration inspires artists to new heights. Salvador Dali encouraged Federico Garcia Lorca’s drawings, Aino and Alvar Aalto completed each other by thinking about a house from both the inside and the outside, Emilie Flöge the fashion designer was not only Gustav Klimt’s muse but also translated his artistic visions into magnificent and revolutionary dresses.

Overall, however, reading the notes about the different relationships saddened me somewhat. It appears that all too frequently the women were appreciated mainly for their bodies and looks, were often much younger than the ‘artistic men’ to whom they became muses. Many of the letters on display show a male obsession with the body, a female obsession with the mind and the emotions. Take this sad little P.S. at the bottom of one of Camille Claudel’s letter to Rodin: ‘Surtout ne me trompez plus.’ (Please stop cheating on me.)

Needless to say, this ‘muse’ period was often transient, and the men moved easily on to the next shiny thing, leaving quite a lot of despair, desolation, broken dreams, mental health issues, abandoned children etc. in their wake. There are only two women who acted like men in this respect: Alma Mahler (the original groupie, her list of lovers and husbands reads like a Who’s Who of the Germanic arts at the turn of the 20th century- Gustav Mahler, Walter Gropius, Oskar Kokoschka, Franz Werfel) and Gala (married to Paul Eluard, in a threesome with him and Max Ernst, eloped with Salvador Dali and then short affairs to encourage many, many younger artists).

Even the happy marriages only appear to have stayed happy because the wife died prematurely (as is the case with Aino Aalto and Sophie Taeuber-Arp), and so was presumably somewhat idealised by the surviving partner. Not for too long, however. Within three years, the men settled down with a new life partner. Jane Austen certainly observed and expressed this perfectly in Persuasion: ‘All the privilege I claim for my own sex (it is not a very enviable one, you need not covet it) is that of loving longest, when existence or when hope is gone.’

I am very glad I caught this exhibition, where I could have spent hours, but the downside of visiting on the last day was that they had run out of exhibition catalogues. And this is one catalogue that I really would like to keep.

I hope you have all been enjoying the nice weather this week. I’ve been mostly stuck inside, as we’ve been busy at work with two conferences, a workshop, becoming GDPR compliant and budget forecasts. However, sunshine is always good for the soul, and especially at the weekend. And I’ve managed to sneak in a couple of cultural events too…

On Thursday I watched the film 120 BPM (beats per minute), runner-up at the Cannes Festival last year. Filmed as a sort of faux-documentary of life as an activist member of ACTUP Paris in the early 1990s, it captures that frenetic spirit of being young (but not only), fighting for your life as well as for justice, fighting Big Pharma, public ignorance and apathy, government failure to debate, inform or provide any coherent policies. It is also a love story and, inevitably, as with any story about AIDS, there is grieving. But this is no Philadelphia or Longtime Companion, unashamed tear-jerkers, with (usually not gay) actors fading away eloquently and elegantly. This is about anger and survival, doing anything you can to feel alive, about strategy and protest and disagreements within the group, but also about coming together, solidarity and changing the world. ‘Paris were frankly a bunch of complete maniacs’, a former ACTUP London member said, and I had to laugh as I tried to imagine those protest or virulent discussions transposed in a British environment. The two male leads are extremely charismatic: Arnaud Valois from Lyon and Nahuel Pérez Biscayart from Argentina (who, as far as I can tell, are both gay, which makes it all the more realistic) make that very serious struggle look like fun.

The film transported me back to 1989-1992 when I too was young and politically engaged, although in our case it was regime change and democracy that we were fighting for. In spite of the disillusionment or flaws or failures (and the pain of watching friends die), it was an exhilarating movement to be part of (both mine and ACTUP) – and this is perfectly captured in this film. It’s all too easy to say that the world has moved on since then regarding attitudes towards AIDS and the LGBTQ+ community, but sadly, it hasn’t really progressed that much. The film is forbidden in several countries (where homosexuality is illegal) and in my own home country, alas, there was a church-organised protest when it was first screened.

A very different atmosphere on Friday when I attended an early morning viewing of the Rodin Exhibition at the British Museum. This beautifully curated, reasonably small show demonstrates that you don’t need to overwhelm museum-goers with information or exhibits if you stick to a narrow topic and present it well. Rodin was obsessed with ancient sculptures, and collected many of them himself, so it was refreshing to see to what extent they inspired his own work.  There were plenty of original plaster, bronze and marble examples of many of Rodin’s sculptures on loan from the Musée Rodin in Paris, as well as the Parthenon marbles that are already (controversially) in the British Museum.

I also got to hear that Lord Elgin originally wanted sculptor Antonio Canova to ‘renovate’ the Ancient Greek fragments and complete them. Luckily, Canova was wise enough to not meddle with the beauty of the original. Rodin himself was so taken by the incomplete statues, that he deliberately sculpted many of his own like that.

The links with literature were never far away. Not only was Rainer Maria Rilke briefly Rodin’s secretary, but I was not aware that Rodin had illustrated Baudelaire’s Fleurs du Mal (one of my favourite volumes of poetry, especially back when I was in my teens). And that he intended to reproduce it in sculpture as well.

A wonderful, calming way to start the day with art, not forgetting the quotes from Rodin about the sculptor’s ability to capture motion. 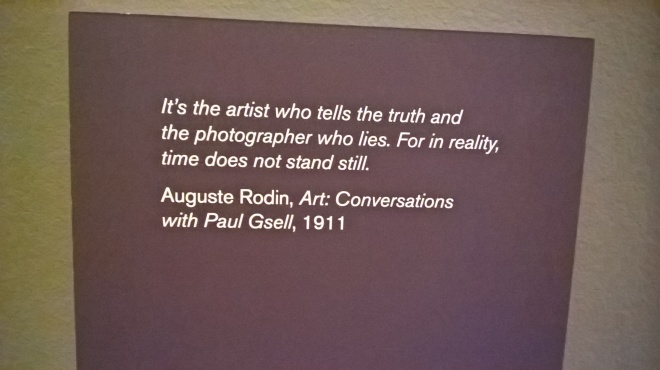 For next week, I have a very special recommendation for you: experience a piece of literature in an all-immersive annual event at Senate House on 23rd May. To celebrate 200 years since the first creation of Mary Shelley’s Frankenstein, the School of Advanced Studies will present a Living Frankenstein evening, with pop-up activities, talks, films, performances and ghost stories. The full programme is here.

Finally, no weekly summary would be complete without a few books begged, borrowed, stolen or bought.

From the library I borrowed Susan Jacoby’s The Age of American Unreason, the May read for the David Bowie Book Club. Written in 2007-8, it is sadly more timely than ever. I was also looking for some Richard Yates novels which I haven’t read yet, but found instead a very bulky biography by Blake Bailey A Tragic Honesty. Nicely cheery, then…

I also got Ali Smith’s Autumn, the so-called Brexit novel, and Louise Penny’s A Great Reckoning. I’ve already finished the latter: this author is one of my favourite comfort reads, and Three Pines is where I would love to retire if only it existed. I also came across a strange little volume called Alberta Alone by Cora Sandel, an early Norwegian feminist compared to Colette and Jean Rhys.

Last but not least, Europa Editions are producing new editions of Jean-Claude Izzo’s Marseille trilogy and have sent me the first volume, Total Chaos. Little do they know that it is one of my favourite French novels (or trilogies) ever and that I bribed a second-hand bookshop in Lyon to find me all three volumes in French. You can expect a close read of the book in French and in translation coming up soon. (Although my personal favourite is Chourmo, the second in the trilogy, coming out in August 2018.)