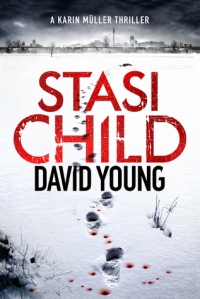 David Young’s new series set in 1970s East Germany just about qualifies as historical crime fiction, but the history is so recent that the scars are still prone to reopen and suppurate. Personally, I found this book quite an emotionally draining experience (some things were just too familiar, even though I did not grow up in East Germany but in another Soviet satellite state). But for those who have a sufficient distance from the events, it is a thrilling and entertaining tale. The background feels quite fresh, as it’s not been used too much in crime fiction to date.

Young takes a number of historical facts, such as political prisoners making IKEA furniture in East Germany, repatriation agreements for under-16s between the West and the East, the Stasi turning family members against each other, youth work camps for ‘difficult’ children and escape tunnels to the West, and spins an enthralling and claustrophobic tale out of them. If anything, one might reproach the author with trying to tackle too many of the grim GDR realities at once, throwing everything plus the kitchen sink at this story, a common enough failing with debut authors. He does, however, blend the multiple storylines quite skilfully, and there is no arguing with the sinister atmosphere of paranoia and fear which he creates.

Karin Müller is everywoman – as her name (a very common German name) indicates – a police officer trying to survive in a tough world. She gets roped into a strange investigation into the death of a young girl in the no-man’s land around the Berlin Wall. It appears the youngster was trying to escape from the West to the East – almost unheard of at the time. So why is the Stasi getting involved, are they trying to cover up something? Karin feels increasingly uncomfortable about Jäger – her Stasi superior – and his interference in the investigation, nor is she sure she can trust her partner Tilsner, despite the strong physical attraction she feels for him. Finally, she feels guilty about her husband Gottfried, a good man, a teacher with Western sympathies, from whom she feels more and more estranged. The author does an excellent job of conveying that feeling of helplessness, of not being able to trust anyone, which was a permanent fixture of Communist dictatorships.

There are some elements which stretch belief here (the tricks which Karin and her team have to resort to at times, the lengths to which she is prepared to go for the sake of the investigation), but overall it’s a cracking little thriller, with a fantastic cover to boot. I’ve also heard it’s been recently optioned for a TV series – and it does sound perfect for that, so here’s hoping it gets made.