A while ago I wrote about the wry amusement I felt when reading about ‘supportive spouses’. Perhaps writers feel the need to make such a fuss over them (and other supportive family members) when they are endowed with such a person because they know how often that is not the case. Treasure your rare speciman (usually a speciwoman).

I attended a workshop with the very poetic, sweetly unassuming yet still fiercely feminist writer Michèle Roberts at the Geneva Writers’ Group this Saturday. In a private conversation, she too confirmed that family and close friends are sometimes the least supportive of our writing. Could it be that they fear they lose us when we enter that door into fearful magic and fluid morals through which they cannot or will not follow? Or is it simply more practical, immediate needs which they feel are not being met: cooking, cleaning, admin? I can understand the fears at the uncertainty of outcome or the financial constraints. But to belittle the writing, to see it as a time-consuming hobby, which you should set aside when the ‘real issues of the day’ crop up… that is hard to swallow.

Yet that is precisely what Jane Austen did, hiding her manuscripts when visitors dropped in, as they did so often. You can barely hear the frustration in her perfectly controlled prose, but there are scenes of satire (of garrulous and silly neighbours) in every one of her books, or spirited defence of novels in ‘Northanger Abbey’.

A novel I recently read, Henry Sutton’s ‘My Criminal World’, portrays the dilemma of writerly anxieties and insecurities, especially when faced with the indifference of far more successful spouses, from the man’s point of view. This insecurity may drive a mild, rather ineffectual crime writer to contemplate a real crime. The hurt is clearly visible, under the thick layers of self-deprecating humour, and I’m not sure I quite believe the ending of the book, because I have grown to dislike the writer’s wife so much. 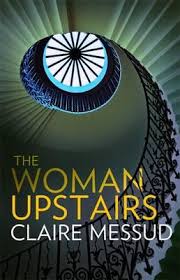 One of the extracts that Michèle Roberts read to us was the beginning of Claire Messud’s book ‘The Woman Upstairs’ and I was so struck by it that I bought it as soon as I got home. That unforgettable opening: ‘How angry am I? You don’t want to know. Nobody wants to know about that.’ I have yet to finish the book and see if it lives up to that opening, and I’ve certainly heard many readers have been put off by it. ‘Show don’t tell’, they bleat like Easter lambs, but is that because it’s a woman expressing anger, and that is still a taboo? When a man expresses anger, he is seeking to change the world. When a woman expresses anger, it’s hysteria. Of course, in Nora’s case, she is unmarried, and her parents are only vaguely unsupportive (or simply vague). So perhaps she really only has her own fears and lack of ambition to blame for her failure to have ‘Great Artist’ written on her tombstone.

Yet there is something there that I can relate to, however unlikable some readers have found the main character. It is so difficult to believe in your own talent, to allow yourself wings and the daily practice to make them become more than cumbersome appendages. The minute you venture beyond your enclosure, rejections come thick and fast. Words and muses refuse to visit. Gnawing doubts set in. How much easier to go back in the box, to think small, to believe the incessant and insistent whisper of your dear family… I so wish I could be satisfied with a job, with making money, with a decent place to live and a ‘normal’ family life.

‘Keep fighting!’ Michèle told me as we parted. Thank you, Michèle, I will, because a life without writing is too unbearable, meaningless.

I could have been the woolly Einstein, the genius keening at the stars,

the earthly power to devour all kind allegiance, unbound art.

Nefarious phases of the moon I could have harnessed, could have dazzled,

Showed how to handle disruption and monsters, wild and unruly,

tamed with my mind.

I should have been the mad scientist, harbouring a supportive spouse in my shade.

Parented remotely, aloof with all answers, but no time to wonder, observe or listen.

And when knives have fallen, when chips have been laid,

asunder we surrender and wonder anew:

where power was parcelled, where prospects cut off.