Something a little different this Friday – a lesson in modern history, as the 25th anniversary of the fall of most East European Communist states takes place this year (and I will spare you the ‘am I really so old, it feels like yesterday’ monologues).

Today I want to take you to a journey in the South-East corner of Europe, to Bucharest in Romania. This is the University Library in the heart of the capital in its renovated reincarnation. But it didn’t always look like that…

25 years ago, in December 1989, as Romania was struggling to shake off the shackles of the Ceauşescu dictatorship, the library (BCU, as it’s known in Romanian) suffered from its central location and proximity to the Communist Party headquarters. A fire devastated the building, destroying more than 500 000 books from its collection, as well as countless manuscripts of famous Romanian writers. 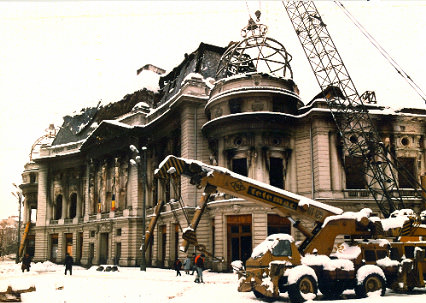 I remember a librarian telling me that she was going back into the burning building and carrying out books with her bare hands, tears streaming down her face, as if they were her children.

Fortunately, an appeal made by UNESCO in 1990 led to an outpour of sympathy, support and book donations from all over the world: 100 000 books donated by private individuals and associations in Romania, 800 000 from elsewhere.

Just behind the library was a Secret Service stronghold and listening centre (now integrated into the library extension). The bullet shots attest to the heavy fighting that took place there during those confusing days in late December. I had to write my thesis in another library, as the BCU was closed for many years following this disaster.

The library reopened in 2001. The refurbished old reading rooms are pretty much as I remember them… except for the laptops on every desk, of course. 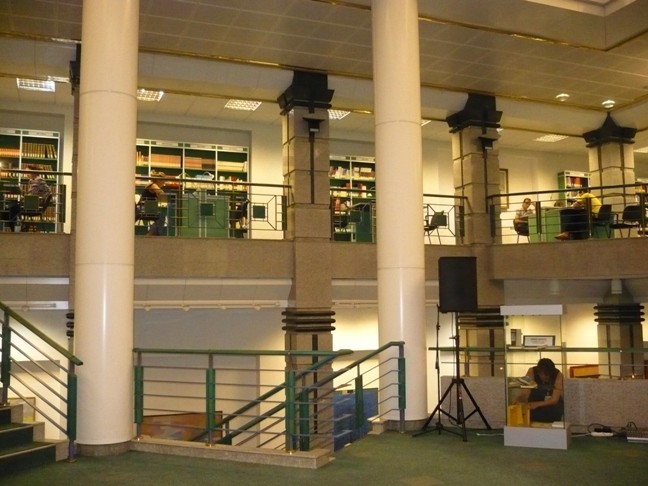 The new wing is perhaps less ‘atmospheric’ but much more user-friendly. And I like the combination of open shelving and book ordering system. After all, a library without shelves to browse is a bit lifeless, isn’t it?

Unless otherwise specified, all the pictures are from the website of the library http://www.bcub.ro .