I read two books with summer in their title to ease me into autumn. I’m not quite ready for autumn yet, when I feel I haven’t really had a summer (or at least the nice bits of summer, only the heat). Luckily, we have a few summer days to look forward to this coming week. Both of these books were both fun, but also thoughtful, lyrical, filled with characters I wanted to get to know better,and very evocative in their setting. 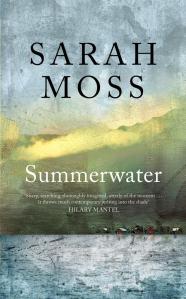 Sarah Moss is one of the authors I will read without questioning: her work is always interesting and tries to push the boundaries, even if it’s not always 100% successful. This latest book is more in the vein of what one might call the ‘exasperated humour’ of contemporary family life of Night Waking rather than her historical fiction, such as Bodies of Light or Signs for Lost Children.

A random assortment of families or couples are spending their summer cooped up in log cabins in a Scottish holiday park. Of course it is raining. ‘It can’t keep up like that all day, there can’t be that much water up there’, people are reassuring themselves, but for most of the day it does. The author seems to be having fun finding different ways to describe the relentless, never-ending downpour. ‘Rain is God’s way of stopping Scots having sinful levels of fun’. Or ”the Scottish sky is better at obscenity than any human voice’.

Understandably, tempers are frayed, especially since there is a foreign family having parties until late at night in one of the cabins (they are variously – and carelessly – described as Romanians, Bulgarians, Polish, although in fact they are from the Ukraine, with that typical lack of curiosity about geographical precision that comes from people who would be very miffed if you confused their Yorkshire accent with a Brummie one, or Minnesota with Michigan).

We get to see fitness fanatic Justine, bored of her rather judgemental husband, using running as an excuse to escape the children for a couple of hours and despising anyone who isn’t as driven as she is. Elderly David, a retired doctor, and his wife Mary – the chapter from her point of view, being one of the most moving portrayals of gradual sinking into dementia, grasping at notions and words. Young couple Josh and Milly, who are planning to get married and are doing a test run of domestic life with sex-fuelled days, and some lacklustre cooking and conversation. Lola and Jack, young kids bored with their parents – an overly anxious mother and a father who’s taken his work with him on holiday, so they wander around looking for someone to play with – or bully. A family with utterly fed up teenagers, each embarking on potentially dangerous activities.  A family with even younger children, struggling so much to find ways to keep them entertained that they forget to look after themselves.

There are a lot of amusing and recognisable vignettes of family life, across a range of ages and political beliefs, but I believe the author intends to do more than that. This is designed to be a ‘state of the nation’ novel, albeit on a small scale, and that’s why she also brings in descriptions of nature, of the environment, the climate and how humans link to it, what will stay behind once the humans have left. I accept all that and found it worked for me on the whole, really enjoyed the book most of the way through. But then, for some reason, it seems to stop abruptly, with a sudden dramatic event. It felt too rushed: I’d have liked to hear more from each of the different voices, perhaps their reactions to the event, or some kind of conclusion.

I’ve known Alison Anderson as a translator from French into English (Muriel Barbery, Le Clézio, Amélie Nothomb), but she also speaks excellent Russian, and she uses her knowledge of the country, its literature and culture, to evoke the late 19th century in the Ukraine, as well as the present (the novel was published in 2016 and is set in 2014). In the modern day we have Katya, a London publisher of Russian origin, who is hoping that the recently unearthed diary of Zinaida Lintvaryova will resurrect her fortunes, as well as the translator Ana, who falls in love with Zinaida’s voice and of course with her famous guest.

Who is the famous summer guest? Well, Zinaida kept a diary of the three years in the late 1880s, during which she and her family hosted on their rural estate in north-eastern Ukraine the writer Chekhov and his family for the summer. Zinaida had qualified as a doctor, but had to stop practising, as she was blinded by a fatal illness. Chekhov forms a great bond with her, based partly on their shared profession, but above all on her great listening skills and unsentimental, uncomplaining approach to life. He ends up entrusting her with the manuscript of a novel that he has been trying to write. Ana gets overexcited at the thought that there might be a lost Chekhov novel and that she might be the one to translate it.

Not only do we have lush descriptions of country life and family squabbles, love interests and disappointments, but also what Chekhov describes as ‘living well, inspecting each moment for honesty and fullness and awareness’. I just loved the fascinating discussions about literature and human psychology between Anton Pavlovich (who was just starting to gain fame as a writer at that time) and Zinaida. For instance, this revealing passage about Anna Karenina, in which Chekhov states:

… if we all had Anna’s desperate soul, the world would descend into a chaos of tragedy. That was Tolstoy’s vision for the novel, based on a true incident – so such things do happen. But most often… banality. Which is why I prefer to err on the side of comedy. Otherwise life would be altogether too hard to bear, don’t you think? If love always led to train platforms? All this passion tearing people apart, sending decent women out into the night without so much as a bonnet on their head?

But the present-day story also has its merits, with thoughts on translation and mediating between cultures, and displacement more generally, as well as love and its loss, and even the protests on the Maidan in Kiev in 2014. There is even a bit of a mystery attached to it. Overall, an enchanting, dreamy book, one I wish I’d read much sooner.

16 thoughts on “Last of the Summer Reading: Summerwater and The Summer Guest”